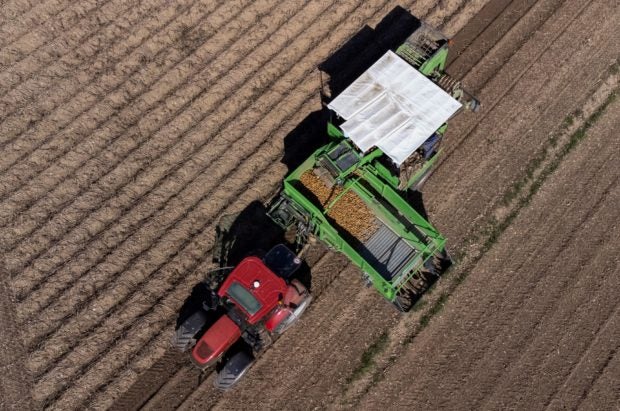 A potato harvester is seen on a field near Rickenbach, Switzerland September 23, 2021. Picture taken with a drone. REUTERS FILE PHOTO

ZURICH — Swiss agricultural output is expected to fall 6.6% this year due to bad weather conditions, the government said on Tuesday.

“Total output has fallen while production costs have increased,” the Federal Statistics Office said in a statement. “Weather conditions have adversely affected most crops, while animal production as a whole continues to grow.”

A cold and frosty spring followed by hail and an extremely rainy summer had a severe impact on crop production, leading to a 9.0% fall in its production value to an estimated 3.8 billion Swiss francs ($4.10 billion).

Flooding devastated parts of Western Europe in July, attributed by meteorologists to the effects of climate change.

While German states and parts of Belgium were among those worst hit, Switzerland also experienced flooding and severe storms this summer.

Stone fruits had experienced one of their worst harvests in the past two decades, the statistics office said, while other harvests including hay, grain, potatoes and sugar beets were also impacted.

Overall agricultural production was expected to bring in 4.1 billion francs in gross value added for the year, helped by increases in dairy and beef production.

Switzerland is anticipating a butter shortage