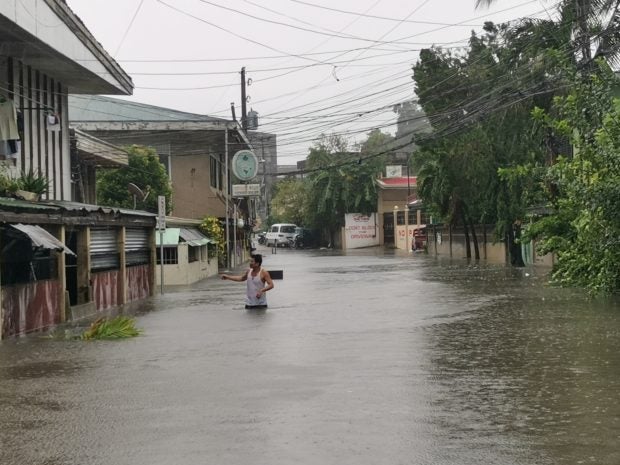 TACLOBAN CITY––Classes and work in government offices in Biliran province were suspended Monday amid the threat of Tropical Depression “Lannie.”

Work in offices dealing with disaster risk reduction and management as well as medical front-liners, however, continue.

The Philippine Coast Guard (PCG) based in Naval also suspended voyages for all types of sea vessels and watercraft.

In Eastern Samar, a road section in Barangay Binaloan, Taft was closed to all motorists due to possible landslides amid heavy rains, said Gov. Ben Evardone.

The continued rains on the island triggered landslides rendering some roads impassable.

The incidents triggered the closure of the road used as access to Toledo City on the western coast of Cebu.

The Department of Public Works and Highways (DPWH) is clearing the area as of Monday afternoon.

In Cebu City, the disaster management office is monitoring a riprap that collapsed over the weekend near the river in Buhisan.

Authorities also reported landslides in Barangay Pulangbato, which covered half of the road. A similar incident also happened in Barangay Sinsin in Cebu City.

Aside from the affected roads, no other infrastructure or houses were damaged.

The PCG has canceled all trips in all ports of Cebu. At least 200 passengers were stranded, most of whom were located at the port of Olango Island in Lapu-Lapu City.

In Bohol, the heavy downpour on Monday caused up to waist-deep flooding in several road networks.

The police rescued on Monday at least seven families in Calape town in Bohol. The families were trapped in their houses due to the floods.

Staff Sergeant Maria Fe Pedros, the investigator of the Calape Police Station, said the affected households were brought to the evacuation center.

“The children and elders are now safe,” Pedros told the Inquirer by phone.

A family of three from Loay town in Bohol was also rescued Monday morning after floating on the sea.

All boat trips to Bohol and Cebu were canceled, while work at the provincial Capitol was suspended at 1 p.m. to ensure the safety of the employees.

However, the work suspension does not apply to personnel involved in the delivery of basic and health services, preparedness/response to disaster and calamities, and/or the performance of other vital services, such as the Provincial Health Office and the Provincial Disaster Risk Reduction and Management Office, among others.

A utility vehicle and a coaster were deployed at the Capitol to transport employees to their homes.

In Negros Occidental, passengers and rolling cargoes were stranded in the different ports of the province and Bacolod City.