14 areas still under Signal No. 1 as TD Lannie goes over Negros Oriental

MANILA, Philippines — Fourteen areas in the country are still under Signal No. 1 as Tropical Depression Lannie is now over Guihulngan, Negros Oriental, the weather bureau said Monday.

In its 5 p.m. update, the Philippine Atmospheric, Geophysical, and Astronomical Services Administration (Pagasa) said Lannie was spotted in the vicinity of Guihulngan Negros Oriental at 4 p.m.

Pagasa said Lannie made its fifth and sixth landfall over San Fernando, Cebu, at 1:45 p.m. and Guihulngan, Negros Oriental at 3:30 p.m. respectively.

It is now moving westward at 25 kilometers per hour, packing maximum sustained winds of 45 kph near the center and gustiness of up to 55 kph. 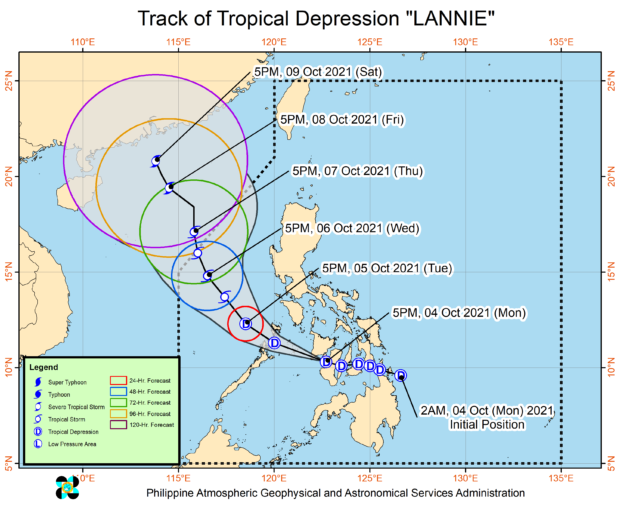 Moderate to heavy rains are likely over Western Visayas and Mimaropa, Pagasa said on Monday until Tuesday morning, while light to moderate with at times heavy rains are also possible over Calabarzon, Bicol Region, and Mindanao.

Scattered flooding, including flash floods, and rain-induced landslides may occur, the weather bureau warned, especially in areas that are susceptible to these hazards.

The following areas remained under Tropical Cyclone Wind Signal No. 1:

The following areas remained under Tropical Cyclone Wind Signal No. 1:

Strong winds with occasional gusts will be experienced in areas where Signal No. 1 is raised, which may cause up to very light damage to structures and vegetation.

Pagasa said the enhanced easterly flow north of the tropical depression may also bring occasionally gusts reaching strong breeze to near gale in strength over Extreme Northern Luzon and the coastal and mountainous areas of the eastern section of Luzon in the next 24 hours.

Lannie will likewise bring moderate to rough seas over the coastal waters of the Philippines, especially in areas under Signal No. 1.

Pagasa said the tropical depression is seen to move generally west-northwestward over the Visayas archipelago until Monday night before emerging over the Sulu Sea and cross the Cuyo archipelago.

It is seen to make another landfall in the vicinity of northern Palawan or Calamian Islands on Tuesday morning.

Pagasa said Lannie is forecast to remain a tropical depression, with a possibility to slightly intensify once over the Sulu Sea or West Philippine Sea.

The tropical depression may exit the Philippine Area of Responsibility on Thursday morning.