New Japanese government to be heavy with ex-PM Abe allies 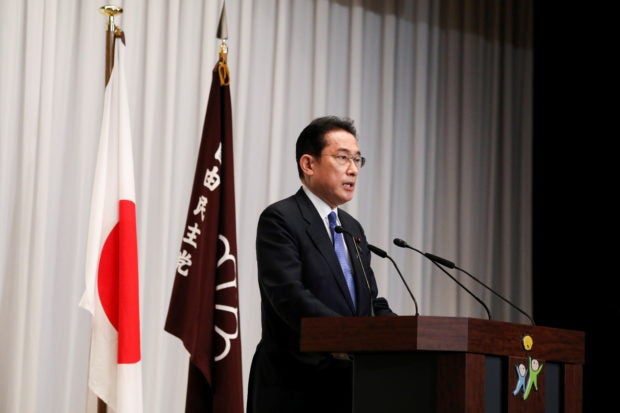 Former Japanese Foreign Minister Fumio Kishida speaks during a press conference at the Liberal Democratic Party (LPD) headquarters after he was elected as the party president in Tokyo, Japan September 29, 2021. REUTERS FILE PHOTO

TOKYO — Japan’s incoming prime minister Fumio Kishida will formally take office on Monday, naming a government set to be heavy on allies of former prime minister Shinzo Abe and ensuring Abe’s conservative base will retain influence over the new cabinet.

Kishida, a former foreign minister with an image as a low-key consensus builder, was chosen last week to lead the ruling Liberal Democratic Party (LDP), beating three other contenders to take the post and ultimately, based on the party’s majority in parliament, the premiership.

As the face of the party, the 64-year-old will also lead it through a general election in the face of headwinds generated by criticism of outgoing Prime Minister Yoshihide Suga’s handling of the pandemic that has battered the LDP’s support ratings. The election must be held by Nov. 28.

“I want to face this time ahead with strong feelings and strong determination,” Kishida told reporters on Monday morning.

Though 13 of the 20 positions will be filled by those with no prior experience of cabinet posts, in line with a Kishida pledge to give chances to new people ahead of the election, the heavyweight posts will go to allies of Abe or Taro Aso, the outgoing finance minister.

Hirokazu Matsuno, an education minister under Abe, will be named to the key chief cabinet secretary position, while current education minister and Abe ally Koichi Hagiuda is set to become trade and industry minister, the point person on energy policy.

Takayuki Kobayashi, tapped to head the new post of economic security, is allied with Amari, who is an architect of Japan’s economic security policies aimed at China to protect sensitive technology.

The soft-spoken Kishida, from a traditionally dovish LDP faction, had already moved to the right during the LDP campaign, reflecting an ongoing shift in the LDP as well as the likelihood he would need Abe’s help to win.