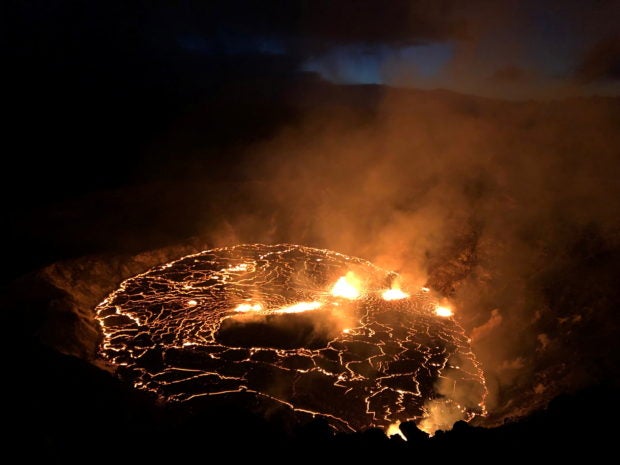 A rising lava lake is seen within Halema’uma’u crater during the eruption of Kilauea volcano in Hawaii National Park, Hawaii, U.S. September 30, 2021. USGS/B. Carr/Handout via REUTERS

Hawaii’s Kīlauea volcano, in its first eruption in nearly a year, was filling the crater at its summit with hot red lava and clouding the skies with volcanic smog on Thursday morning, the U.S. Geological Survey said.

The latest eruption of Hawaii’s youngest and most active volcano began on Wednesday afternoon.

While the lava presented no immediate threat to populated areas, residents who live downwind of Kīlauea were warned of possible exposure to sulfur dioxide and other volcanic gases that can irritate the respiratory system.

The eruption was taking place within the confines of Hawaiian Volcanoes National Park, which remained open to visitors who wished to observe the lava’s glow and the pluming smoke from a safe distance.

Kīlauea’s last eruption took place in December 2020, when a water-filled lake that had formed at the crater evaporated, replaced by a lava lake.

Two years before that, a string of earthquakes and a major eruption led to the destruction of hundreds of homes and businesses as lava flowed down to the ocean over a period of several months, hardening into a new land.