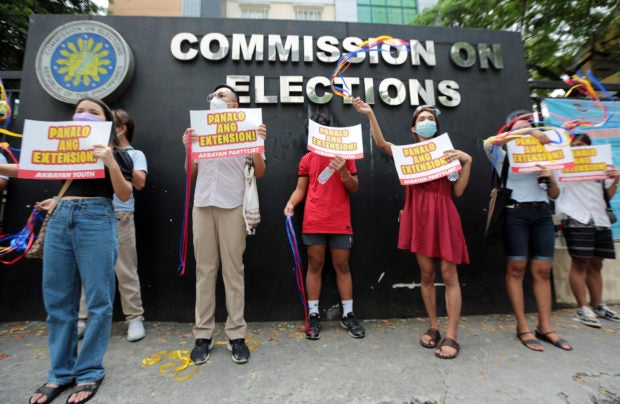 CAUSE FOR CELEBRATION Members of Akbayan Youth on Wednesday show up outside the Commission on Elections office in Quezon City to support the extension of voter registration from Oct. 11 to Oct. 30. —GRIG C. MONTEGRANDE

MANILA, Philippines — First-time voter Nicole Pascual queued before 6 a.m. on Monday at a mall in Tarlac province, where long lines of would-be registrants snaked in the parking area.

Pascual, 18, secured the 292nd of the 500 slots for that day, and was done at 4 p.m. The experience was tiring, she said, but her “vocal political stance” pushed her “to put my words into actions” by voting in the 2022 elections.

“I can’t settle with just making noise on social media,” Pascual said. “I’m qualified to vote, so I thought I have to get myself registered and be part of the change that I’m picturing in my mind.”

Pascual was among thousands of people lining up in the wee hours to beat the earlier Sept. 30 deadline for voter registration.

Against the advice of its senior officials, the leadership of the Commission on Elections (Comelec) on Wednesday allowed 16 more voter registration days, or from Oct. 11 to 30.

The six commissioners unanimously approved the extension after the passage on Monday at the Senate and House of Representatives of measures extending the registration to make up for the days lost to the pandemic lockdowns.

Comelec Chair Sheriff Abas said they heeded the “wisdom” of Congress and the “clamor” of last-minute voter applicants.

“On the part of the Comelec, not one director was in favor of extension; however, we have to balance things,” Abas said in an interview.

Nicco Viado, who lined up at 5 a.m. at a mall in Pasig City on Sept. 18, said the government’s failed response to COVID-19 was the reason he registered to vote.

“It’s been almost two years but it seems like there is still no semblance of normalcy in our lives,” Viado, 24, told the Inquirer.

Referring to the scandal involving the misuse of pandemic funds, he said: “It seems like the highest government officials are prioritizing making money over an efficient response to the health crisis.”

Jezreel Reyes, 21, was unable to register despite having filed a half-day work leave in anticipation of a long process.

This was how she narrated her experience: She arrived at around 5:30 a.m. on Wednesday at a mall in Manila, where the guards told her to line up but did not provide a number.

At 7 a.m., the guards called those who had scheduled appointments and told them to enter the mall. It was only before 8 a.m. that everyone else was told that if they would not receive a designated number for the limited slots, they should just try again the next day.

“The sad part is that some of those lined up were there as early as 12 midnight,” Reyes said.

According to Rogelio Alicor Panao, political science professor at the University of the Philippines Diliman, the surge of voter applicants is not a unique phenomenon but is “typical” of Filipinos who tend to chase deadlines.

“Every time we need to [do] transactions such as securing licenses, Filipinos hustle at the last minute. And voter registration is not an exception,” he said.

Panao cited Republic Act No. 8189, or The Voter’s Registration Act of 1996, that allows for continuous voter registration until at least 120 days before an election or 90 days before a special election.

He said the Comelec was mandated to implement election laws and procedures including voter registration, processing of certificates of candidacy, printing of ballots, and precinct arrangements.

He surmised that the Comelec set the deadline at the end of September “because of [those preparations] and in consideration of the ongoing pandemic [that might call for] contingency plans.”

And the extension of the deadline will not necessarily address the problem that is rooted in the people’s habit of waiting until the last minute to register, he said.

“It’s difficult when you pass a law and you are not consulting the implementing body (Comelec),” Panao said. “What could possibly be the intention of Congress in passing the law extending the deadline?”

Panao said that if lawmakers really wanted to extend the deadline to prevent disenfranchisement, they could have filed a petition for mandamus at the Supreme Court.

Filing a mandamus is a possible remedy because it will mandate the Comelec to perform its constitutional duty of implementing RA 8189, he said.

After Sept. 30, the Comelec will focus on receiving certificates of candidacy from Oct. 1 to 8.

It will resume receiving voter applications on Oct. 11, a Monday.

Registration will be done from Monday to Friday each week, but will include Oct. 30, a Saturday and the last day.

For overseas voters, registration is extended from Oct. 1 to 14.

The Comelec expects around 300,000 applicants during the extension period, Abas said.

Comelec spokesperson James Jimenez said there would likely be no further extension because “that would really impact on the [election] preparations.”

“As Chair [Abas] said, most officials said no [to the extension] because they do not see crowds [of applicants] in their areas. The rush is just in the urban centers,” Jimenez said.

In the House, Speaker Lord Allan Velasco thanked the Comelec “for seeing the wisdom of extending the voter registration to allow more Filipinos to exercise their right of suffrage, one of the most important rights and responsibilities we have as citizens.”

—With a report from Julie M. Aurelio INQ