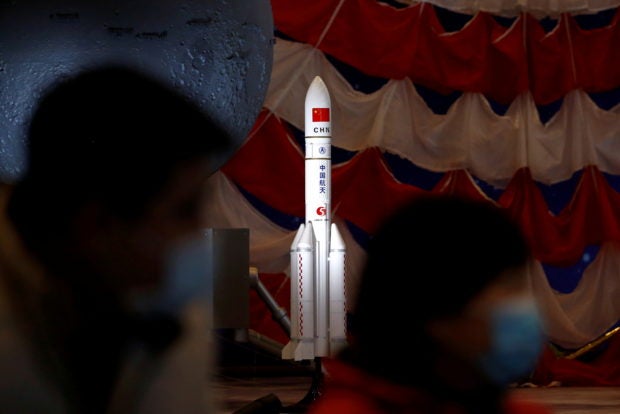 A model of the Long March-5 Y5 rocket from China’s lunar exploration program Chang’e-5 Mission is displayed at an exhibition inside the National Museum in Beijing, China March 3, 2021. REUTERS FILE PHOTO

ZHUHAI, China — China is expected to launch its next generation of heavy-duty rockets in 2028 powerful enough to send a crewed spacecraft to the moon, the country’s main space contractor said on Wednesday.

The new heavy-lift launch vehicle would be capable of putting a 15- to 50-tonne spacecraft on a trajectory to the moon, said Liu Bing, deputy designer at the China Aerospace Science and Technology.

It would also be powerful enough to place a probe weighing 12 to 44 tonnes on a trajectory to Mars, Liu told reporters at a major airshow in the southern city of Zhuhai, without naming the rocket.

China previously predicted it would complete the design and construction of a rocket with enough thrust to transport its astronauts to the moon only by 2030.

China still lags behind the United States in experience and technology. The last Nasa crewed landing was in 1972 and U.S. astronauts are expected to return to the moon by 2024.

China has been developing the super-heavy Long March 9 rocket with a liftoff weight of 4,140 tonnes and a thrust of 5,760 tonnes, state media reported in May.

That compares with the takeoff mass of the Long March 5 – currently China’s biggest rocket – of about 849 tonnes and thrust of about 1,078 tonnes.

The Long March 9 would be able to place a 25-tonne spacecraft on a course to the moon, Chinese scientists said previously.

China has also set its sights on a Mars sample-return mission around 2030.

China completed an uncrewed Chang’e-5 mission, named after the mythical Chinese goddess of the moon, to retrieve samples from the lunar surface in December.