In COVID-19’s shadow, HIV on march in Eastern Europe 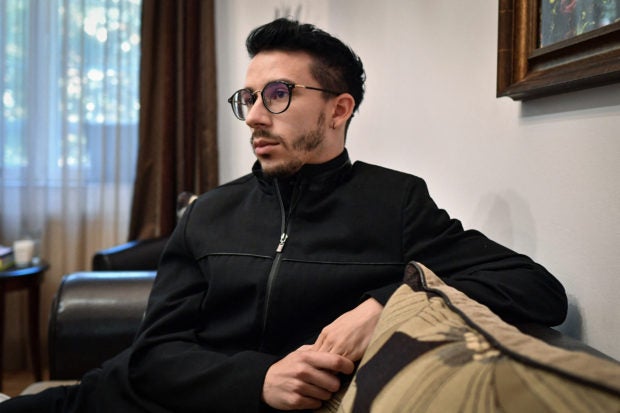 Alexandru Tantu, a young HIV-seropositive IT specialist and activist for the rights of patients, is pictured during an interview with AFP at his home in Bucharest, Romania, on September 7, 2021. AFP

BUCHAREST — In a Bucharest back street, drug addicts rush towards an ambulance handing out free syringes. While the eyes of the world focus on the Covid-19 pandemic, the fight against HIV has slowed down in Eastern Europe.

Three times a week, Alina Schiau and colleagues from the Romanian anti-AIDS Association (ARAS) go out to the rougher parts of the city to hand out syringes and bandages to injecting drug users, and condoms to sex workers.

But their funds are running low and stocks dwindling. Come November, their ambulance might have to stay in the garage.

“What’s cheaper? To buy a syringe and thus focus on prevention? Or to treat a patient for years?” says social worker Ada Luca, indignant at government inaction.

Bulgaria and Romania are both former Eastern bloc countries, and in 2019, 76 percent of AIDS cases diagnosed in Europe were in the East, according to the European Centre for Disease Prevention and Control (ECDC).

“It is obvious that the number of contaminations has increased since the start of the pandemic”, Schiau told AFP.

Quarantine requirements, travel restrictions and reduced access to rapid testing and diagnostic services all undermined efforts to roll back HIV/AIDS, he said.

UNAIDS data shows 140,000 new infections in Eastern Europe and Central Asia in 2020, compared with 170,000 in 2019, which experts attribute to a dramatic slowdown in screening, not a drop in cases.

It is a similar story in neighboring Bulgaria.

Regional health centres were “overwhelmed and hardly ever did any HIV testing during Covid,” said Alexander Milanov, program director at the country’s National Patients’ Organization.

The pandemic has disrupted supply chains and the transport of medicines, exacerbating historic shortages in countries such as Romania despite huge scientific strides that have dramatically improved outcomes for HIV patients in rich nations.

Alexandru Tantu, a 28-year-old, HIV positive IT specialist, has seen first-hand how other European countries treat patients better, and how in Romania, it is a daily struggle to get the required drugs.

“We came to realize that we are abandoned,” he told AFP. “Hence all the anger and the fear that tomorrow we might not have our treatment.”

Still, with his stable job, he regards himself as relatively “privileged”. In his advocacy work, he says, he receives calls from patients who are considering suicide.

‘Fear in the stomach’

The HIV/AIDS crisis in Romania dates back to the communist years.

Around 11,000 children born in the 1980s under the communist regime of Nicolae Ceausescu were infected as a result of contaminated or unsterilized syringes or transfusions with untested blood.

Today, several doctors told AFP that hospitals have yet to receive funds from the health ministry following a budgetary correction — and in Romania, patients can only get the medication they need from hospitals, not pharmacies.

Romania’s health ministry did not respond to an AFP request for a comment.

Volunteers do everything they can to fill the gaps in care.

Alina Dumitriu and her “Sens Pozitiv” campaign group have been helping patients for 16 years, relying on donations.

Between phone calls and texts from desperate patients, Dumitriu sorts out HIV pills, worth thousands of euros, from a red plastic bag.

“There are months when I help up to 30 patients, while also sending some tablets to hospitals,” she explains.

“These patients still live with fear in their stomachs, not knowing if the next day they will still have medication,” she says.

Read Next
Fumio Kishida: calm centrist picked as Japan’s next prime minister
EDITORS' PICK
Powered by style, innovation and passion
Why Tagle is a leading papal contender
House energy committee chair Arroyo bats for cheap electricity
KWF has no power to ban, censor written works – Lagman
In Borongan, nuns play hoops (not mahjong)
A laptop that maximizes your WiFi so you can maximize your productivity
MOST READ
Why Tagle is a leading papal contender
Arjo Atayde reveals proposal to Maine Mendoza was ‘more than a year’ in the making
My neighbor FVR: From soldier to president
Zubiri on SRA mess: Shameful, disgusting
Don't miss out on the latest news and information.