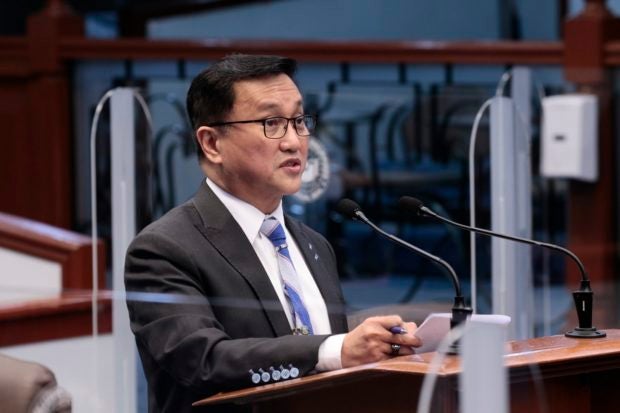 Tolentino, however, was quick to say that Duterte’s defense of his people should not be considered as a “tolerance of corruption” but “a measure of what friendship is.”

“That’s his personal choice [to defend his people] but if given a chance to advise I would probably tell him that he already made his point just let the investigation proceed and he can probably refrain from defending persons he could probably term as friends,” the senator said in an interview on ABS-CBN News Channel.

Senators are looking into the government’s transactions with Pharmally, which was awarded over P8.6 billion worth of supply contracts for medical supplies in 2020 despite being only several months old and having just P625,000 in paid-up capital.

Since the start of the investigation, led by Senator Richard Gordon’s blue ribbon committee, senators have been at the receiving end of tirades coming from the President.

Duterte, at one point, surmised politics may be behind the investigation, which senators have denied.

Malacañang, for its part, said the President is trying to find fault in senators investigating the government’s purchase of allegedly overpriced medical supplies to protect “innocent” government officials.

But Tolentino, an ally of the President in the Senate, cited the separation of powers, saying both the executive  and legislative branches of government should respect one another.

“I think these are personal statements but if we look at separation of powers I think the respect due to the Senate must be accorded, the same is true with the presidency itself must be respected,” he said.

“But one thing that struck my attention was that the President is used to defending people close to him, his friends. So this is human nature,” Tolentino added.

Meanwhile, Tolentino, who described himself as a “keen observer” of the Senate probe, said he is focusing on what legislation should be crafted to address procurement issues uncovered during the hearings.

Among these bills include the amendment of the existing powers of the Government Procurement Policy Board “to frequently revise” their implementing rules and regulations.

Tolentino also pushed for the passage of a bill he filed seeking to institutionalize the “Filipino First” policy in the government procurement system.

“It’s important not just for that particular issue but even post-pandemic that we should encourage Filipino products,” he noted.