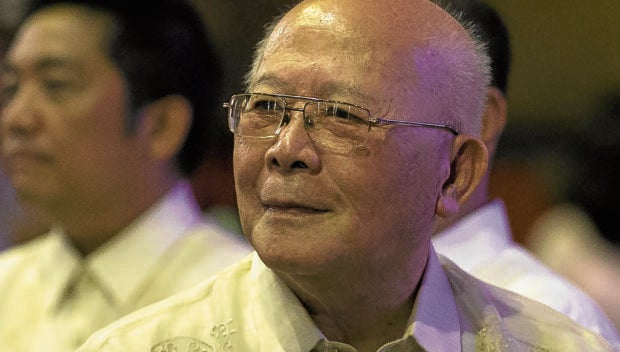 MANILA, Philippines — Bienvenido “Bien” Lumbera, National Artist for Literature and Ramon Magsaysay Awardee for Journalism, Literature and Creative Communications, has died, leaving a mark as a champion of the Filipino language and a believer in the artist as activist.

The poet, playwright, critic, translator and teacher died due to complications from a stroke at 9.14 a.m. on Tuesday at his home in Quezon City. He was 89.

Ever convinced that the artist should always speak out against injustice, Lumbera was a past president of the Alliance of Concerned Teachers, among other organizations.

“Literature gives a voice to those that have been silenced,” he said in Filipino at a press conference for the National Coalition for the Protection of Workers’ Rights and the militant labor alliance Kilusang Mayo Uno in 2005.

Lumbera was named to the Order of the National Artist in 2006 by then President Gloria Macapagal-Arroyo.

In 2003, amid a controversy involving Malacañang’s questionable additions to the list of chosen national artists, he wrote a short essay that ended with his recommendation “that a law be passed to forestall Malacañang’s intervention in the choice of National Artists.”

The citation described him as “an esteemed writer who challenged Philippine society’s colonial point of view and restored the poems and stories of vernacular writers to an esteemed place in the Philippine literary canon.”

The citation further read: “Language, says Lumbera, is the key to national identity. Until Filipino becomes the true lingua franca of the Philippines, he believes, the gap between the well-educated classes and the vast majority of Filipinos cannot be bridged.”

In his acceptance speech, Lumbera described the award as “awesome, indeed” because “it affirms a principal tenet of nationalist literary studies, the centrality of the vast body of native-language literature in the Filipino literary canon.”

The author and editor of many books, Lumbera was also a recipient of the Carlos Palanca Memorial Award for Literature, the National Book Award, the Pambansang Alagad ni Balagtas award, and the Philippine Literary Prize for Drama.

Born on April 11, 1932, in Lipa, Batangas, Lumbera was orphaned by the early passing of his parents, Timoteo and Carmen.

After World War II, he lived with his godparents Enrique and Amanda Lumbera.

He earned his bachelor’s and master’s degrees from the University of Santo Tomas (UST) and his Ph.D. in comparative literature from Indiana University in the United States as a Fulbright fellow.

Lumbera spent most of his life writing, studying, and teaching the Filipino language, publishing poems in 1953 before he left college.

His teaching career spanned stints at Ateneo de Manila University, De La Salle University, University of the Philippines (UP) Diliman, UST, and Hanover College, among others.

In 1976, he began teaching at UP’s Department of Filipino and Philippine Literature, where he was eventually named professor emeritus.

He was also an influential playwright, known widely for his “Tales of the Manuvu,” “Rama Hari,” and “Bayani,” and musicals based on Jose Rizal’s “ Noli Me Tangere” and Carlos Bulosan’s “America is in the Heart.”

Lumbera went underground after then-President Ferdinand Marcos declared martial law in September 1972. He was arrested in 1974 and detained for a year.

Apart from the importance of pushing Filipino as the language of everyday usage, much of his creative work puts front and center the issue of state oppression in its many forms.

He was a constant presence at demonstrations and press conferences, explaining protesters’ demands and current troubling issues.

But Lumbera also embraced, along with activist causes, the innovative and new. His “Bayani” is a rock opera. His works served as inspiration for a fashion line for retailer Freeway. And he openly expressed admiration for the rapper Gloc-9.

In the 2016 anti-martial law play “Hindi Na Muli” (Never Again) by fellow activist and former detainee Bonifacio Ilagan, he played the role of a father who suffers at the hands of the authorities.

Lumbera left behind his wife, the writer-teacher Cynthia Nograles Lumbera, and their four children.

His remains will be cremated and his ashes kept at the family home until quarantine restrictions allow for the necrological service and state funeral at Libingan ng Mga Bayani.