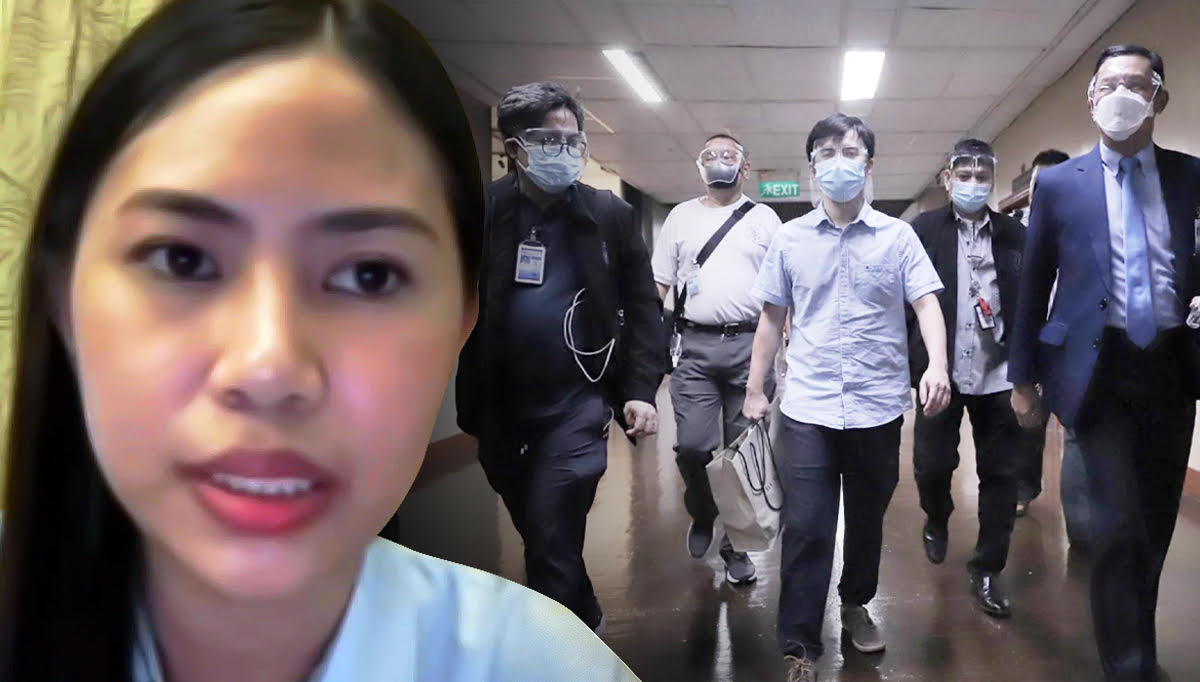 Krizle Grace Mago during her online testimony and Pharmally director Linconn Ong (fourth from left) being escorted inside the Senate building for the resumption of the blue ribbon committee hearing on the firm’s deals with the government. FILE PHOTO/SENATE PRIB PHOTO

A day after saying she was willing to work with the Senate in its investigation of the government’s COVID-19 spending, Krizle Grace Mago, an executive of Pharmally Pharmaceutical Corp., could no longer be reached.

Sen. Richard Gordon, chair of the Senate blue ribbon committee that has uncovered signs of massive corruption in deals that Pharmally got from the government, said Mago became incommunicado.

It was just last Friday (Sept. 24) when Mago gave her most damaging testimony to the committee, agreeing that Pharmally had swindled the government by selling damaged, supposedly medical-grade face shields with tampered dates of production.

“That is something I can’t deny,” she told the committee after video was shown of labels on face shields being replaced to make those appear to be just recently produced.

Sen. Risa Hontiveros, a committee member, presented a witness who testified that old face shields are not being thrown away even if these were “substandard, distorted, dirty, discolored and soiled.”

The witness, who was hired by Pharmally as warehouse worker in August 2021, said labels of medical-grade face shields with 2020 production date were replaced with labels indicating that those were made in 2021.

Gordon, addressing himself to Mago, said it was a case of swindling.

In a reply that sent eyes popping and jaws dropping, Mago said she agreed.

An executive of Pharmally with less than P600,000 in capital but was given contracts worth billions of pesos by the Procurement Service of the Department of Budget and Management (PS-DBM), Mago has been testifying since Sept. 13. Being Pharmally’s main coordinator with the PS-DBM, Mago was first asked by senators about the March 25, 2020 deal involving 500,000 surgical masks, worth P13.86 million at P28 each.

She said Pharmally initially kept its price within the P8 million ceiling but later admitted that the price quoted reached P13.86 million for 500,000 masks. On April 15, 2020, the government paid Pharmally.

It was Mago who told senators that the PS-DBM, on March 25, 2020, asked Pharmally to give a price quotation for the masks. Senators expressed awe at the speed of the transaction since the PS-DBM letter came just a day after Linconn Ong, one of the top Pharmally executives, wrote then PS-DBM chief Lloyd Christopher Lao expressing intent to supply the masks.

On March 25, 2020, the same day that PS-DBM inquired about costs, Pharmally delivered the masks.

Mago also testified that Pharmally received a notice of award of contract from PS-DBM only on April 6, 2020, 12 days after Pharmally delivered the masks to the PS-DBM warehouse in Paco, Manila.

Asked why Pharmally delivered 12 days ahead of the contract award, Mago said she was instructed to do so by Ong and Mohit Dargani, Pharmally corporate secretary and treasurer.

As PS-DBM officials and Pharmally executives explained that the rush in the deal was driven by lack of supply, Sen. Franklin Drilon asked Mago if Pharmally had a ready stock of surgical masks. Mago said no although Ong “was able to negotiate with a supplier.”

A follow up question by Gordon confronted Mago with whether she believed the PS-DBM lacked due diligence in dealing with Pharmally. Mago said yes.

At the blue ribbon hearing on Sept. 17, Hontiveros presented an exchange of messages between Mago and a PS-DBM employee, who had expressed shock at the advance delivery by Pharmally of 2 million masks.

It appeared that deliveries by Pharmally were made even before the PS-DBM requested it. “How would you know how much you’d be paid? They were even concerned that you wouldn’t get your expected price,” Hontiveros told Mago.

In reply, Mago said she would ask her “boss.” Asked who her boss was, Mago responded: “I take instructions from Ong and Dargani.”

Dargani denied it, saying he was not coordinating with Mago in the case of the masks. He pointed to Ong, saying “he was the one in direct contact with the supplier.”

Last Sept. 24, as Hontiveros presented a witness who said he believes the expired medical-grade face shields were for medical workers because the boxes indicated that those were for the Department of Health (DOH), Mago said it was Dargani who instructed her to have the boxes delivered.

“I think because she is used to getting instructions from me, maybe in this scenario, she thought it was me but it’s not the case,” Dargani said.

Mago, however, said, “I always follow instructions.” Asked if the replacement of labels on dates of production for face shields was a case of swindling the government, Mago replied: “I believe that is the case.”

President Rodrigo Duterte, who repeatedly defended the government’s contracts with the company and Michael Yang, his former economic adviser who “lent finances” to Pharmally, raised doubt over reports on expired face shields. Face shields, he said, are made of plastics so how can these expire?

“How can it expire? Unless you abuse it, throw it around. But if you will just wear it and place it properly, how can it expire? It will expire maybe but it will take 10, 15 years,” the President said.

But in a previous statement, Health Undersecretary Maria Rosario Vergeire said medical-grade face shields do have a shelf life because these are for the medical community.

“These medical-grade face shields can deteriorate over time. There is a foam attached for the comfort of medical workers. This foam degrades over time, while some have discoloration,” she said.

“We need supplies to be complete and of quality for our front liners, to protect them from sickness,” she said.

After her damning admission last week, Mago was asked if she wanted to get Senate protection. She, however, asked that she be given time to think about it.

When Mago could no longer be reached or contacted on Sept. 25, Gordon expressed fear that “something might have happened to her.”

READ: Pharmally’s Mago no longer in her condo unit — Gordon

On Monday (Sept. 27), Gordon told CNN Philippines that if Mago remained out of reach, she could be considered as a “fugitive.” “She becomes a fugitive from my book,” Gordon said.

READ: Gordon to Pharmally’s Mago: Show up or be a fugitive