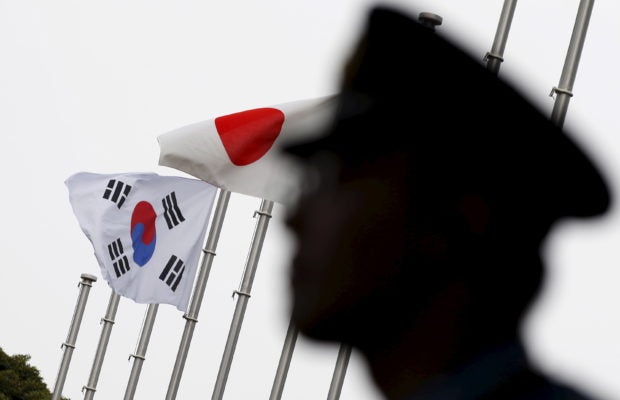 FILE PHOTO: A police officer stands guard near Japan and South Korea national flags at a hotel, where the South Korean embassy in Japan is holding the reception to mark the 50th anniversary of the normalization of ties between Seoul and Tokyo, in Tokyo on June 22, 2015. REUTERS/Toru Hanai

Japan and South Korea are both democracies, market economies and US allies, but their relationship has been strained for decades over Tokyo’s brutal 1910-45 colonial rule of the Korean peninsula.

Around 780,000 Koreans were conscripted into forced labor by Japan during the 35-year occupation, according to data from Seoul, not including women forced into sexual slavery by Japanese troops.

On Monday, the Daejeon District Court ruled that two patents and two trademarks held by Mitsubishi Heavy should be sold to compensate two female Korean plaintiffs in their 90s, according to South Korea’s Yonhap News Agency.

The proceeds are expected to raise enough to pay each victim around 209 million won (US$176,700) in compensation and interest, it said.

It is the first time a South Korean court has ordered the liquidation of Japanese corporate assets in a damages suit filed by World War II forced laborers, Yonhap added.

“The Japanese side strongly requested the South Korean side last night in Seoul and this morning in Tokyo to take appropriate measures immediately,” he added.

The 1965 treaty which saw Seoul and Tokyo restore diplomatic ties included a reparation package of about $800 million in grants and cheap loans and stated that claims between the countries and their citizens were “settled completely and finally.”

Tokyo insists that extinguished the victims’ right to sue.