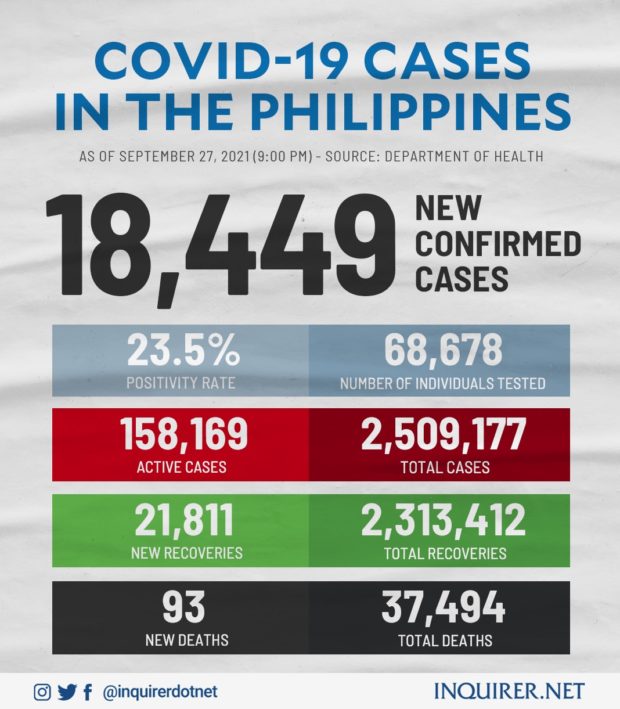 MANILA, Philippines — The Department of Health (DOH) on Monday reported another 18,449 individuals who contracted COVID-19, bringing the total number of infections to 2,509,177.

This puts all active COVID-19 infections at 158,169 nationwide, which currently accounts for 6.3 percent of the total number of infections.

The health agency also reported only 93 new deaths despite three days of not being able to report any additional casualties due to a technical glitch.

“The DOH will report backlog deaths in separate advisories,” it said in the latest bulletin.

Meanwhile, two laboratories were not able to submit data to the COVID-19 Document Repository System in the total tests conducted on September 25, the DOH said. These two labs contribute, on average, 0.07 percent of samples tested and 0.04percent of positive individuals.

The health agency also noted that 130 duplicates were removed from the total case count, of which 61 are recoveries and 4 are deaths.

The DOH also reported that 75 percent of ICU beds, 64 percent of isolation beds, 68 percent of ward beds, and 54 percent of ventilators are currently in use across the country during the COVID-19 pandemic.

In Metro Manila, meanwhile, occupied ICU beds are currently at 77 percent, isolation beds at 55 percent, ward beds at 65 percent while 58 percent of available ventilators were also being used in the region, said DOH.