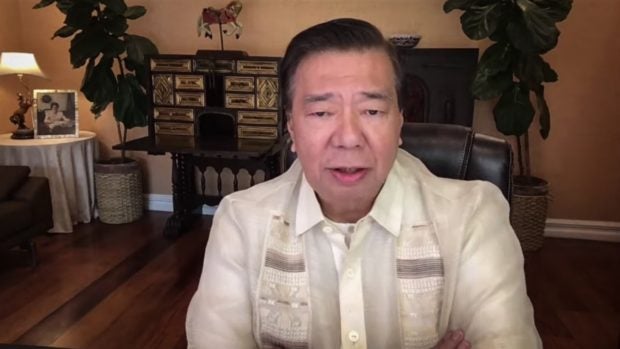 DRILON QUESTIONS PCOO’s 1,000 PERCENT JUMP OF COTERMINOUS POSITIONS: Senate Minority Leader Franklin M. Drilon on Monday, September 27, 2021, questions the 1,000 percent increase in the number of coterminous positions in the Presidential Communications Operations Office (PCOO) proper, or from eight coterminous positions in 2016, at the start of the current administration, to 83 in 2021.  Screen grab/Senate PRIB

From only eight coterminous positions at the start of the Duterte administration in 2016, the number rose to 81 this year.

“Based on our report Mr. Chairman, for 2016 we had eight coterminous,” Ablan said, responding to Drilon’s query.

Ablan explained the PCOO needed “support staff” for the offices the secretary, undersecretaries and assistant secretaries.

“Are you saying that in 2016, PCOO did not have sufficient support staff because they had only eight and you doubled it 1,000 times. Today its 83? That’s unusual,” Drilon stressed.

Ablan again explained that at that time, PCOO officials made no requests for immediate support staff from the Department of Budget and Management.

“But why is there a sudden need to multiply it 1,000 times from eight to 83 at the start of this administration, of the Duterte administration. You only had eight. Today you have 83,” the minor leader asked again.

“Bakit naman ganun? That’s 1,000 times more. What’s so unusual for the past six years that you had to increase your coterminous positions 1,000 times?” the senator went on.

At this point, Ablan pointed out that 35 of 83 coterminous are with newly-created office of the PCOO, which is the Freedom of Information Project Management Office.

PCOO Secretary Martin Andanar came to the rescue after Drilon remarked that he was not convinced by the explanation.

Andanar pointed out that during the past administration, there was also a Presidential Communications Development and Strategic Planning Office aside from the PCOO

“And under the presidency of President Duterte, we have to merge both offices,” he further explained.