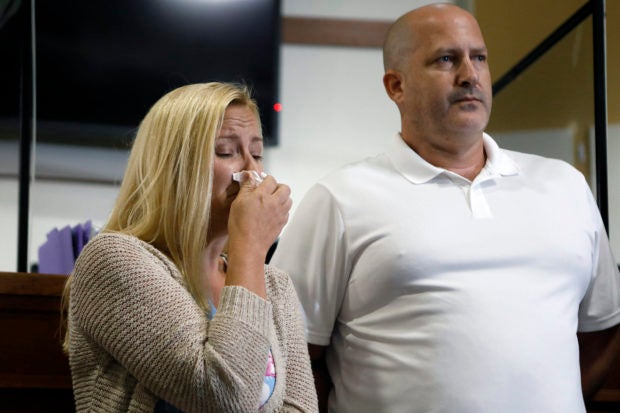 Tara Petito (L) and Joe Petito react while the City of North Port Chief of Police Todd Garrison speaks during a news conference for their missing daughter Gabby Petito on September 16, 2021 in North Port, Florida. AFP

NEW YORK — Relatives and friends gathered Sunday at the funeral service for a young American woman whose disappearance and killing on a cross-country road trip made international headlines, as a manhunt intensifies for her boyfriend.

The family of Gabby Petito reported the 22-year-old missing on September 11 after not hearing from her since August.

Her body was found last Sunday in the western state of Wyoming, near where the white camper van she and her boyfriend, Brian Laundrie, were traveling in was reported seen.

Petito’s death has since been ruled a homicide. Authorities have issued an arrest warrant for Laundrie over fraudulent use of a credit card and have broadened their search for the 23-year-old, who remains at large.

Petito and Laundrie visited several of the West’s state and national parks, chronicling their journey through the awe-inspiring landscapes on Instagram and YouTube.

Petito’s father, who opened Sunday’s funeral service in Holbrook, New York to the public, urged Americans not to be saddened by his daughter’s tragic death, but motivated by her brief, adventurous life.

“When you leave here today, be inspired by what she brought to the table — because the entire planet knows this woman’s name now,” Joe Petito said. “I couldn’t be more proud as a father.”

A live feed of the service showed loved ones hugging in front of bouquets of flowers and large photographs of Gabby Petito. Dozens of police and other first responders were seen lining up to enter the funeral home.