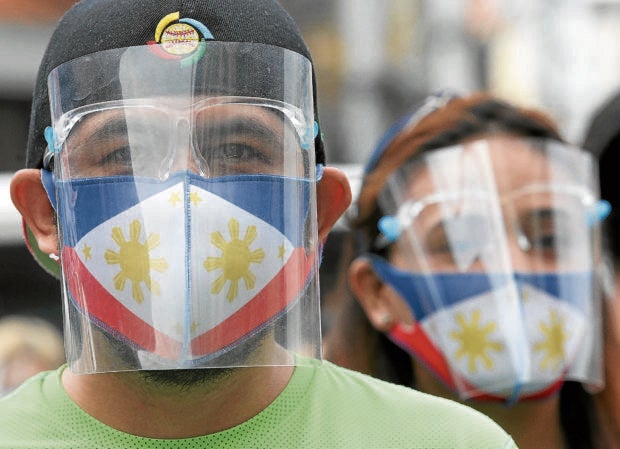 FILE PHOTO: In this December 21, 2020, photo, a man and his companion wear face masks resembling the Philippine flag in Divisoria, Manila, as Palace announced that wearing of face shields along with face masks when out in public is still mandatory. INQUIRER file photo / MARIANNE BERMUDEZ

MANILA, Philippines — The chairperson of a House panel probing the government’s procurement of pandemic supplies last year on Monday sought answers on whether people could get sick or die due to “expired” face shields.

To which the health chief explained that DOH uses a shelf-life of 36 months for face shields because the polystyrene material used as a guard between the user’s face and the shield can degrade after that period.

(May I know from DOH, does the face shield have an expiry date considering that this is not a perishable commodity? Unlike food products, even canned goods, we know that it has an expiry date because it can be spoiled.)

“The DOH has established a shelf life for medical-grade face shields. The shelf life is 36 months, according to our disease prevention and control bureau […] there is a component of the face shield, that has styropor […] ‘yong styropor niya (its styropor), that apparently is what is subject to the shelf-life because pwedeng maging pulbos (it can turn into powder),” Duque replied.

Pimentel further asked if there were expiry dates placed on the face shields provided by Pharmally. Duque said the DOH was looking into the issue.

“Wala naman ho yata (I think there was none) but I’m still having that investigated because of the revelations of the officer of Pharmally.  So we’re checking on this,” he said.

Aglipay then asked Taiño if someone got sick or had died due to the face shield distributed by the DOH to frontliners.

According to Taiño, they have not received any such report or complaint.

(Did anyone get sick and die due to the face shields provided by DOH to frontliners? Ma’am, please answer the question with a yes or no only, has anyone died and got sick because of the face shields issued by DOH.)

(None, the face shields were a big help to our frontliners. We are not aware of any incident, as far as we know.)

Aglipay also insisted whether it was true that the expiry was 36 months, and not six months as the Senate supposedly insisted.

(Is it correct, the expiry is after 36 months, not six months? The Senate says it’s just six months.)

(It’s not 36 months, this is on record, and we will also submit the shelf-life requirement for a face shield, Mr. Chairman.)

To this, Senator Francis Pangilinan raised concerns on whether those face shields were even safe to use, saying that nurses and doctors may have contracted COVID-19 due to the substandard protective equipment provided by Pharmally.

Pharmally is at the center of investigations being done by both chambers of Congress which stemmed from a Commission on Audit (COA) report which showed P67.32 billion worth of deficiencies in the DOH’s COVID-19 funds in 2020.

Part of the P67.32 billion was the P42 billion funds that the DOH transferred to procurement agencies like Procurement Service-Department of Budget and Management, which awarded the P8.7 billion supplies contract to Pharmally despite the firm’s small paid-up capital of P625,000.