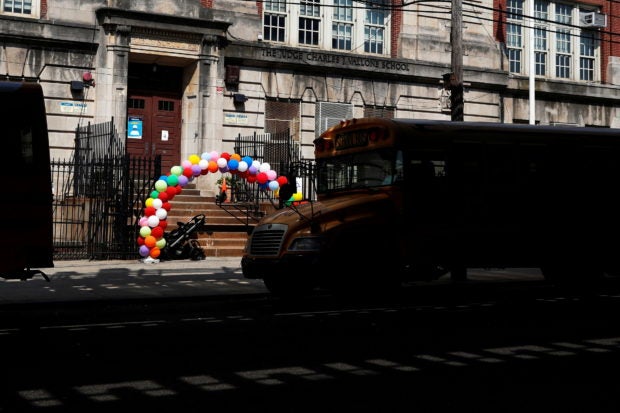 A baby carriage sits at the entrance to elementary Public School 85, amid the coronavirus disease (COVID-19) pandemic, decorated with balloons welcoming students back, in the Queens borough of New York City, U.S., September 13, 2021. REUTERS FILE PHOTO

NEW YORK — A requirement for New York City school teachers and staff to get vaccinated for COVID-19 was temporarily blocked by a U.S. appeals court just days before it was to take effect, but the court on Saturday set a hearing on the matter for next week.

Mayor Bill de Blasio last month set Monday as the deadline for 148,000 staff members of the largest U.S. school system to get at least one dose of a vaccine under a mandate aimed at slowing the spread of the highly contagious Delta variant.

But the U.S. Court of Appeals for the Second Circuit late on Friday blocked the deadline by granting a temporary injunction to a small group of public school teachers and paraprofessionals who are challenging the mandate, which does not allow for weekly testing as an alternative.

The court on Saturday scheduled a hearing on the dispute for Wednesday, following a request by the city for an expedited hearing.

Los Angeles, Chicago and Washington state also have introduced vaccine mandates for teachers and school staff as U.S. educators and parents grapple with how to keep schools safe and open as the country battles the latest coronavirus surge.

In a letter to the court, the city Law Department said the basis for an injunction lacked merit, adding that the uncertainty it creates threatens the “safe resumption of full school operations for the city’s nearly one million students.”

“The order also upsets the reliance interests of parents and caregivers across the city – who need clear and sound safety protocols when they send their children to public schools in the city day after day,” said the letter signed by Corporation Counsel Georgia Pestana.

The four plaintiffs initially challenged the vaccine mandate on Sept. 15 in a civil complaint in U.S. District Court in Brooklyn, saying they stand to lose their jobs, benefits and seniority if they fail to comply with it.

“Such an ongoing, draconian punishment shocks the conscience, violates constitutional rights, and not only should not be permitted, but must be restrained immediately to prevent irreparable harm,” they argued.

The plaintiffs said the school system experience last year showed that vaccinations were unnecessary because a safe learning environment could be achieved with masks and other precautions.