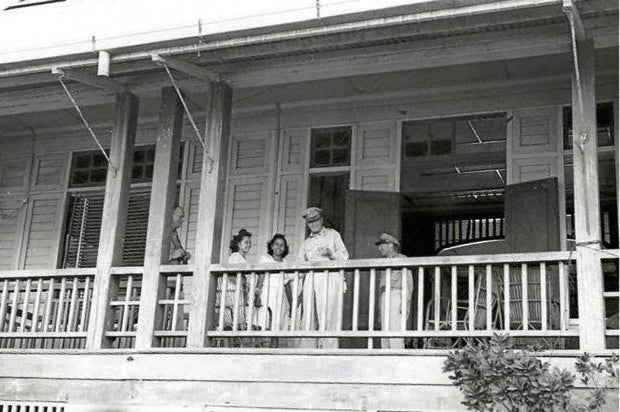 VIEW FROM BALCONY General MacArthur entertains American officers and local visitors at the balcony of the WCES Home Economics building in Dagupan City. —PHOTO REPRODUCED FROM PHILIPPINE VETERANS BANK EXHIBIT “WAR OF OUR FATHERS” AT DAGUPAN CITY MUSEUM IN 2014

DAGUPAN CITY, Pangasinan, Philippines — If he were alive today, American Gen. Douglas MacArthur would be thrilled to find that the Home Economics (HE) building that he used as a command post for three months in 1945 during the tail end of World War II had withstood calamities and modernity.

The newly restored HE building of West Central Elementary School (WCES) here offers visitors a glimpse of MacArthur’s temporary quarters as he continued his campaign to liberate the Philippines from the Japanese after he landed in the Gulf of Leyte on Oct. 20, 1944.

Like the original structure, the new HE building has been painted white and brown. It is made mostly of timber with galvanized iron sheets for its roof. Its dividers are made from carved wood while its windows have capiz shells accented with stained glass.

Revisiting the past through the HE building starts at the pathway under a pergola that leads to a wide, wooden staircase toward the balcony where MacArthur posed for a photograph with two local women and two American officers.

The WCES’ HE building was among the Gabaldon buildings built around the country during the American period in the early 1900s. It was where grade school girls attended classes to learn home management, cooking and food preparation, cleaning, sewing, health and hygiene, and even washing the dishes.

The building earned a place in history after MacArthur and the Allied Forces arrived in Dagupan on Jan. 9, 1945, to fulfill his promise to return and lead efforts to free the country from the clutches of the Japanese Imperial Army. His arrival through Pangasinan’s Lingayen Gulf was considered significant to the liberation of northern Luzon and happened after he and his troops landed in Palo, Leyte, in October 1944. 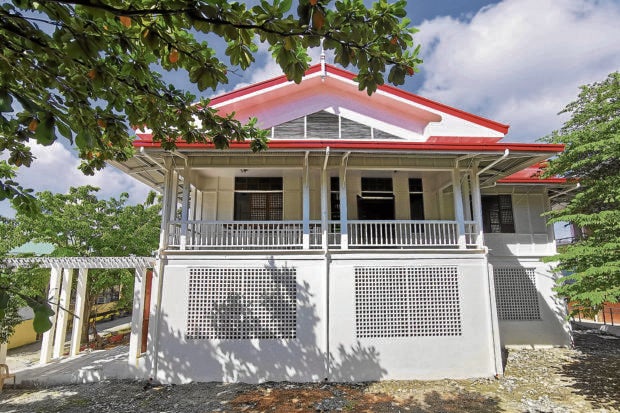 PIECE OF HISTORY: The newly restored HE building of WCES, which Gen. Douglas MacArthur used as a command post in 1945, opens after a two-year reconstruction. —WILLIE LOMIBAO

A feature of MacArthur’s headquarters was a private bathroom with a freestanding Kohler bathtub which, despite its rust and grime, was the most popular item that visitors had been requesting to see for many years.

But for all the HE building’s historical significance, it was left to deteriorate for decades. It was only in 2018 when the Gabaldon School Buildings Conservation Act was enacted that the structure’s sorry state was put in the spotlight.

Pangasinan Rep. Christopher de Venecia, one of the laws’ authors in the House of Representatives, pushed for the restoration of the WCES HE building and its transformation into a tourist destination and a heritage site.

The HE building’s galvanized iron sheet roofs were rusty and crumbling, while its wooden floor, ceiling, and walls had been weakened by the elements or ravaged by termites.

An assessment by the Department of Education (DepEd) in 2018 showed that 70 percent to 80 percent of the building had damaged sections. It cited the need to raise the floor to more than a meter high to avoid future deterioration resulting from annual flooding in Dagupan.

“The wooden posts, beams, girders, floors, trusses, and purlins also showed severe termite infestation, thus the need for immediate replacement so as not to endanger the safety of … students and the public in general,” the report states.

In September the following year, the building’s restoration started on a contentious note as the city woke up to find the old HE building being demolished, triggering a public uproar.

Older residents, many of them attended classes in the building in their youth, were incensed especially after seeing that building parts were haphazardly dismantled and carelessly piled under the sun without protection.

Mayor Brian Lim stopped the construction because the contractor had not secured a building permit.

The DepEd issued an apology to Dagupan’s officials and residents “for the lapses or errors” in the initial implementation of the restoration project, admitting that it caused inconvenience and frustration among locals. 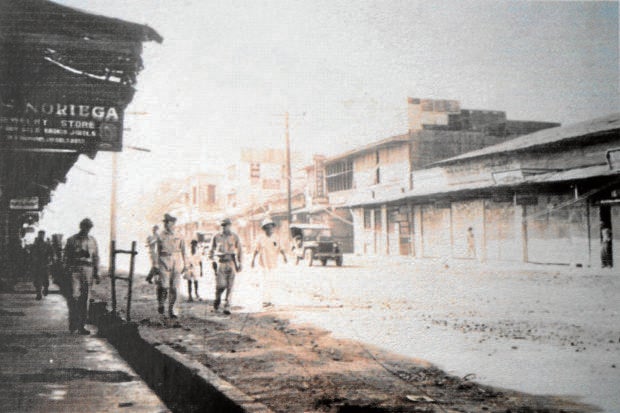 Officials of the DepEd, local government, nongovernmental organizations, and representatives of residents immediately sat down to address the restoration issue. Construction soon resumed and continued amid the pandemic.

On Sept. 8 this year, the HE building was formally opened, a part of nationwide simultaneous turnover ceremonies of restored Gabaldon buildings and newly constructed school buildings implemented by the Department of Public Works and Highways from 2019 to 2020.

Whatever controversies generated by the “lapses or errors” in the beginning of the restoration have been put to rest owing to the “almost accurate” reconstruction and the use of all salvageable materials from the old building, local officials said.

According to Tatum Grace Manzano, division engineer of the DepEd Dagupan, nearly all of the wooden components of the original building were used.

Manzano said wood preservatives were also applied to strengthen old wooden slabs and posts. She added that floor joists were reused, noting that only a fourth of the old building’s floor had been reclaimed and put in its “sala.” 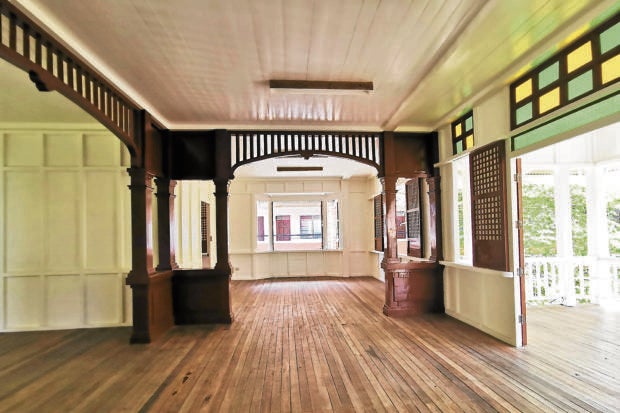 INTERIOR DETAILS: Wooden panels, beams, posts and shutters from the old HE building of WCES are reused in the structure’s restoration. —WILLIE LOMIBAO

Rex Catubig, one of the residents who protested the demolition of the HE building, said he was happy that the DepEd and its contractor “faithfully adhered” to the old architectural design. He was thankful that the pergola of the old HE building was incorporated in the new design as he suggested.

“It is like being in Grade 5 again,” Catubig, 72, told the Inquirer as he walked around the building that shaped his youth. It was on the ground floor where he attended classes under “Miss Samson, who was very strict,” he said.

But he had never set foot on the second floor when he was a student of WCES as it was exclusive for girls, he recalled.

Ma. Rita Teresa Riñoza, WCES principal, said the newly restored building would still be used along with the classrooms on the ground floor. The second floor would serve as a library, a multipurpose hall and a museum. 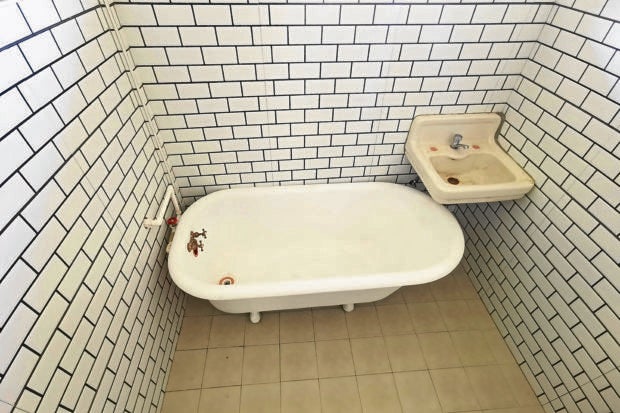 General MacArthur’s bathtub has been restored and remains its top attraction. —WILLIE LOMIBAO

She believed that holding classes in the building would give students a sense of pride.

Catubig said the role of the HE building in Philippine history could not be ignored as he suggested that a section of the second floor be turned into a repository of MacArthur memorabilia.

He said the restored bathtub as the centerpiece of the tiled bathroom would still draw the interest of visitors and tourists.

But while there is plumbing and running water, the bathroom will not be opened for public use and will remain a tourist attraction, Riñoza said.

The other fixtures, including a dresser, a china cabinet and other pieces of furniture, have not been returned to the building as these are being refurbished, she said.