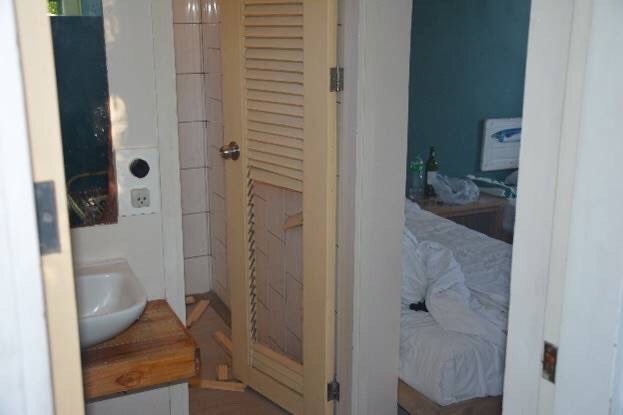 Photo of the bathroom at a La Union resort where Bree Jonson was supposedly found by Julian Ongpin on Saturday. Ongpin claimed that he got his wounds after forcibly opening the door of the restroom where Jonson went in. PHOTO COURTESY OF PNP PRO-1

A counsel for the family of Breanna “Bree” Jonson on Thursday said the late visual artist could not have physically hung herself, disputing claims by her boyfriend Julian Ongpin.

Jonson’s family also could not believe that she killed herself, said lawyer Jesselie Suñga, who pointed to “inconsistencies” in Ongpin’s statements.

“Julian initially told the first responder that he found Bree hung inside the CR (comfort room) using a bra strap. Then come the news the other day, it became a cat chain,” she said.

“And if you look inside the CR, there’s no way Bree could have hung herself. “There was nothing there that you could hook something into which is strong enough to carry a person,” she said.

She said there was a ligature mark on Jonson’s neck and it was “like a thin line.”

Suñga also disputed the police autopsy report finding no other injury on Jonson’s body aside from the ligature mark.

“There were bruises found in some other parts of Breanna’s body other than her neck,” her law firm Suñga Salandanan and Ampuan Law Offices said in a statement early on Thursday.

A copy of the ITRMC medicolegal report obtained by the Inquirer said Jonson died of “asphyxiation due to strangulation injury, allegedly intentional.”

Intentional injuries, however, may still be self-inflicted.

The report was signed by general surgeon Dr. Carlo Raphael Ramos of ITRMC where Jonson was “declared dead on arrival.”

Police have yet to draw a clear picture of what really happened in the room at the Flotsam & Jetsam Artist Beach Hostel in San Juan, La Union, where Jonson was found unconscious by officers who responded to reports of an altercation.

He said Ongpin told investigators that he took Jonson out of the bathroom where he found her hanging from a cat chain and moved her to the bed in the room.

Based on statements made by the PNP chief and the National Bureau of Investigation, the law enforcement authorities are now conducting a criminal investigation, calling the hostel room where Jonson was found a crime scene.

“We are cross-matching Ongpin’s statement to the other pieces of evidence we found in the crime scene, including the result of the tests [conducted on Jonson’s body],” Eleazar told reporters.

Jonson’s body was found on the bed in the room early Saturday morning, less than 24 hours after she and Ongpin had checked in.

Ongpin, 29, is a son of tycoon and Marcos-era trade minister Roberto Ongpin.

Police investigators found a cat chain in the room, he said.

But Suñga told the Inquirer that neither the cat chain nor the bra strap was listed in the police inventory of items they found in the room, adding that a black cloth which was photographed by the police at the crime scene was also missing.

Justice Secretary Menardo Guevarra told reporters on Thursday that the Department of Justice might take over the investigation of Jonson’s death from the La Union provincial prosecutor.

The prosecutor had ordered the release of Ongpin, who was arrested by the police on drug charges after he was found in possession of 12.6 grams of cocaine. He explained that the circumstances of the arrest were not covered by those allowed for warrantless arrests.

The NBI finished its own autopsy on Thursday morning and processed the crime scene upon the request of her family.

NBI Director Ferdinand Lanvin said he would ask the PNP to share the evidence they had gathered with the bureau.

Suñga called on Ongpin, his family and his lawyers to reach out to them and Jonson’s family amid rumors that he already left the country.

“The family needs their cooperation in the ongoing investigation, especially now, so that we would know the truth on what happened to Bree, and for Julian to be able to clear his name if he is really innocent,” she said. —WITH A REPORT FROM DONA Z. PAZZIBUGAN