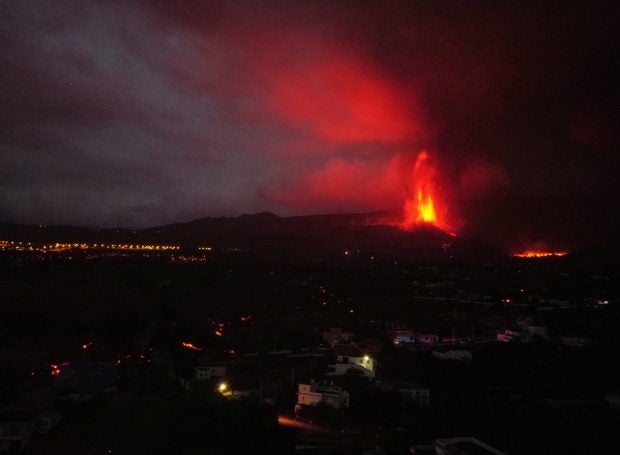 Lava and smoke rise following the eruption of a volcano in Los Llanos de Aridane, on the Canary Island of La Palma, Spain, September 22, 2021. Picture taken with drone. REUTERS/Nacho Doce

LA PALMA, Spain — Jets of red hot lava shot high into the sky on the Spanish island of La Palma on Thursday morning as toxic ash from the Cumbre Vieja volcano coated the surrounding area and authorities sought shelter for thousands of people forced to flee.

For a fifth day, lava flowing down the slopes of the volcano engulfed houses, schools and banana plantations, although more slowly than in previous days.

“Everything that started on Sunday as something out of the ordinary, something beautiful to watch, turned into a tragedy the next day,” said Nancy Ferreiro, who owns a local jewellery business. “I have many friends there, families who have lost everything. Our hearts are broken.”

Walls of black lava have advanced slowly westward since Sunday, incinerating everything in their path.

Farmers at banana plantations near the town of Todoque raced to save as much as possible of their crop, piling their trucks high with sacks of green bananas.

With more than 200 houses destroyed and thousands of people unable to return home, the Canary Islands’ regional government said it would buy two housing developments with a combined 73 properties for those made homeless. Spanish banks jointly announced they would offer vacant homes as emergency shelter.

Property portal Idealista estimated the volcano had so far destroyed property worth around 87 million euros ($102 million).

Volcanologists have said gases from the eruption are not harmful to health. But a plume of thick cloud now extends some 4.2 km (2.6 miles) into the air, raising concerns of visibility for flights. The airport remains open but authorities have told pilots to steer clear of the eruption site.

Prevailing winds are expected to propel the cloud eastward in the coming hours over the rest of the Canary archipelago, the Iberian peninsula and the Mediterranean, according to the European Union’s Copernicus Atmosphere Monitoring Service.

Local authorities have warned people to clean food and clothes to avoid ingesting the toxic ash.