After fall of Bashir, Sudan closes door on support for Hamas 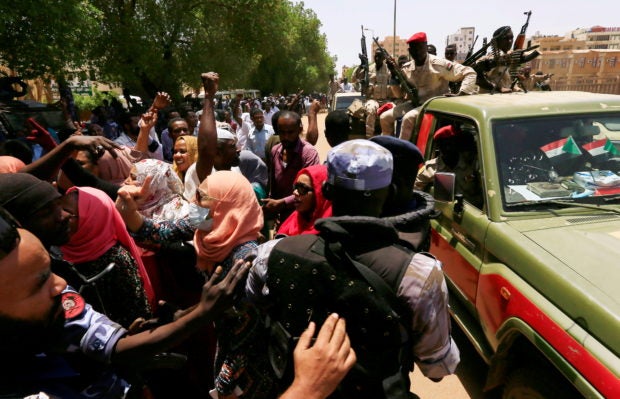 Sudanese citizens attempt to cross a police blockade as they chant slogans outside the court during the new trial against ousted President Omar al-Bashir and some of his former allies on charges of leading a military coup that brought the autocrat to power in 1989, in Khartoum, Sudan September 1, 2020. REUTERS FILE PHOTO

KHARTOUM — Sudanese authorities have taken control of lucrative assets that for years provided backing for Hamas, shedding light on how the country served as a haven for the Palestinian militant group under former leader Omar al-Bashir.

The takeover of at least a dozen companies that officials say were linked to Hamas has helped accelerate Sudan’s realignment with the West since Bashir’s overthrow in 2019. Over the past year, Khartoum has won removal from the U.S. state sponsors of terrorism (SST) list and is on course for relief of more than $50 billion in debt.

Hamas has lost a foreign base where members and supporters could live, raise money, and channel Iranian weapons and funds to the Gaza Strip, Sudanese and Palestinian analysts said.

Seized assets detailed by Sudanese official sources and a Western intelligence source show the reach of those networks.

According to officials from a task force set up to dismantle the Bashir regime, they include real estate, company shares, a hotel in a prime Khartoum location, an exchange bureau, a TV station, and more than a million acres of farmland.

Sudan became a center for money laundering and terrorism financing, said Wagdi Salih, a leading member of the task force – the Committee to Dismantle the June 30, 1989 Regime and Retrieve Public Funds.

The system was “a big cover, a big umbrella, internally and externally”, he said.

A Western intelligence source said techniques were used in Sudan that are common to organised crime: Companies were headed by trustee shareholders, rents collected in cash, and transfers made through exchange bureaux.

Bashir openly supported Hamas, and was friendly with its leaders.

“They got preferential treatment in tenders, tax forgiveness, and they were allowed to transfer to Hamas and Gaza with no limits,” said a task force member, speaking on condition of anonymity.

Sudan’s journey from pariah state to U.S. ally has been gradual. In the decade after Bashir took power in 1989 the country became a hub for radical Islamists, sheltered Osama bin Laden for several years, and was sanctioned by the United States over links to Palestinian militants.

Bashir later tried to distance himself from hardline Islamism, stepping up security cooperation with Washington. In 2016 Sudan cut ties with Iran and the following year U.S. trade sanctions against Khartoum were dropped after Washington accepted that state support for Hamas had ceased.

But until Bashir’s fall, networks that had supported Hamas remained in place.

Hamas investments in Sudan began with small-scale ventures such as fast food restaurants before venturing into real estate and construction, according to an official on the task force.

An example was Hassan and Alabed, which started as a cement company and expanded into large real estate developments.

The task force says it was in a network with about 10 other large companies with interlinking share ownership connected to Bashir ally Abdelbasit Hamza that moved large sums through foreign bank accounts.

The biggest was Alrowad Real Estate Development, established in 2007 and listed on Khartoum’s stock exchange, with subsidiaries that the Western intelligence source said laundered money and traded in currency to finance Hamas.

Hamza was jailed in April for 10 years on corruption charges and sent to the Khartoum prison where Bashir is being held. The task force said he had assets worth up to $1.2 billion in his name. Hamza’s lawyer, who also represents Bashir, could not be reached for comment.

A second network, worth up to $20 million, revolved around the broadcaster Tayba and an associated charity named Almishkat. It was run by two Hamas members who got citizenship and amassed businesses and real estate, according to Maher Abouljokh, the caretaker brought in to manage Tayba. The TV channel was funnelling money from the Gulf, laundered millions of dollars, and had clear links to Hamas, said Abouljokh.

Contacted by Reuters, Hamas official Sami Abu Zuhri denied the group had investments in Sudan, but acknowledged an impact from Sudan’s political shift: “Unfortunately, there were several measures that weakened the presence of the movement (Hamas) in the country (Sudan) and limited political ties with it,” he said.

By last year, Sudan was desperate to escape the SST list, a prerequisite for debt relief and support from international lenders.

Under pressure from the United States, it joined the United Arab Emirates, Bahrain and Morocco in agreeing to normalize ties with Israel – though it has moved slowly to implement the deal.

A former U.S. diplomat who worked on Sudan under the Trump administration said shutting down the Hamas network was a focus in negotiations with Khartoum. “We were pushing on an open door,” he said.

The United States gave Sudan a list of companies to shut down, according to one Sudanese source and the Western intelligence source. The State Department declined to comment.

Many Hamas-affiliated figures went to Turkey with some liquid assets but left behind about 80% of their investments, the task force official said.

Sudan’s transitional leaders “consider themselves the exact antithesis of Bashir in regional terms,” said Sudanese analyst Magdi El Gazouli. “They want to sell themselves as a component of the new security order in the region.”