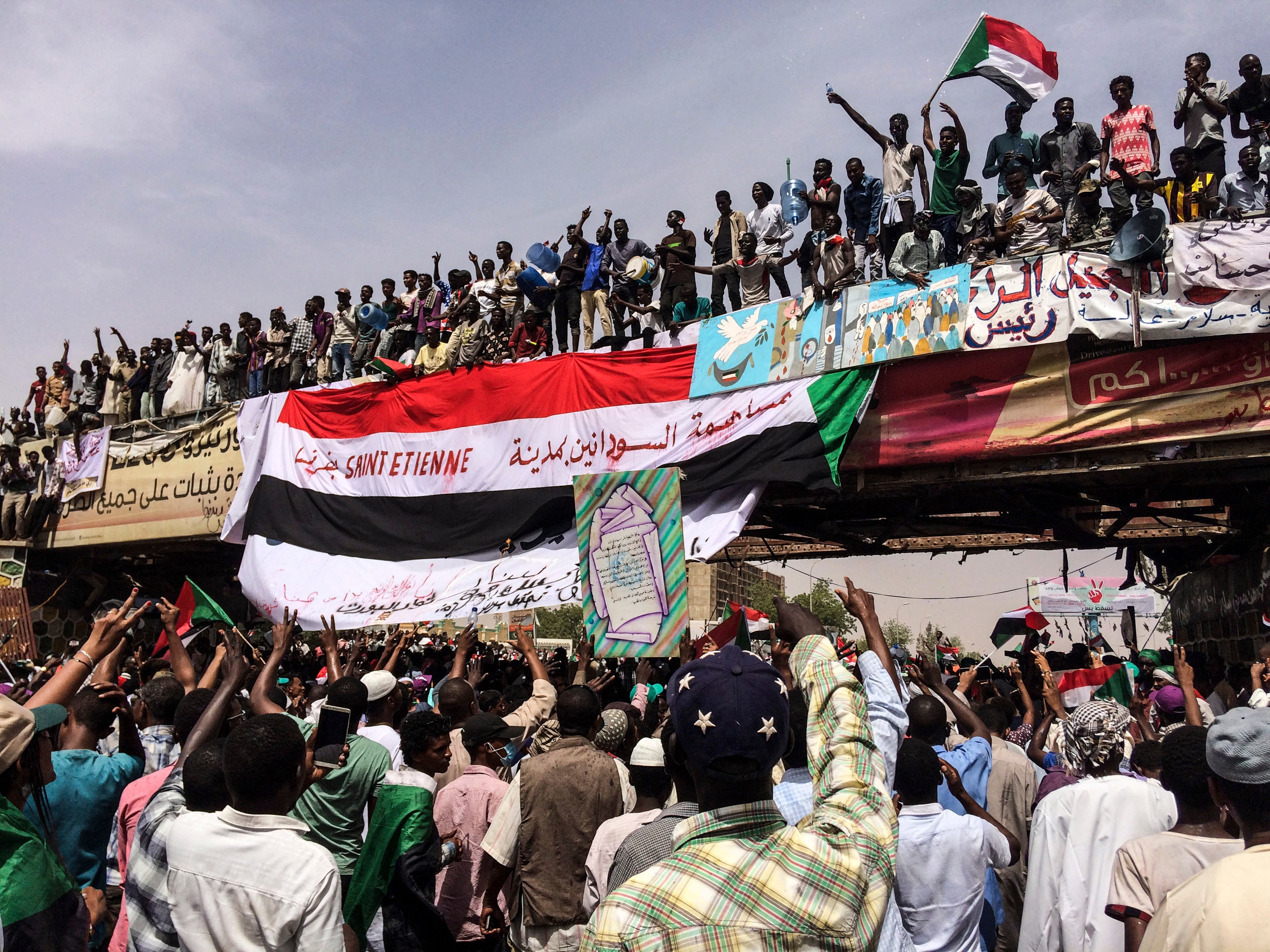 Demonstrators gather in Sudan’s capital of Khartoum, Friday, April 12, 2019. The Sudanese protest movement has rejected the military’s declaration that it has no ambitions to hold the reins of power for long after ousting the president of 30 years, Omar al-Bashir. (AP Photo)

CAIRO — The Sudanese military on Friday swiftly replaced the country’s transitional leader linked to the Darfur genocide after street rallies against him and said that it wouldn’t hand over ousted President Omar al-Bashir to the International Criminal Court, where he faces charges of crimes against humanity.

Thousands of jubilant protesters celebrated in the streets after Defense Minister Gen. Awad ibn Ouf, who was name de facto leader after overthrowing al-Bashir on Thursday, announced he was stepping down as transitional leader. He named a reputable army general as his successor.

Ibn Ouf said he would be replaced by Gen. Abdel-Fattah Burhan, general inspector of the armed forces, as head of the transitional council, which will rule the country for two years until elections.

“I am confident he will steer the ship to safe shores,” he said of Burhan, adding he was stepping aside to “preserve unity” of the armed forces.

Burhan was one of the generals who reached out to protesters at the week-long encampment near the military headquarters, meeting with them face to face, and listening to their views.

Chants rang out across the sit-in where tens of thousands have been rallying in front of the military headquarters to protest the military takeover of power after al-Bashir’s ouster. “Revolutionaries, we will continue our path,” the protesters shouted as they danced and clapped.

Earlier Friday, another top general, Omar Zein Abedeen said that the 75-year-old al-Bashir would not be extradited to the International Criminal Court, based in The Hague, Netherlands, saying doing so would be “an ugly mark on Sudan.”

“Even rebels carrying weapons, we don’t extradite them,” he told reporters at a news conference in Khartoum.

Zein Abedeen said Sudanese courts would hold al-Bashir “accountable,” but did not specify what charges he could be prosecuted on. After his arrest, the military denounced him and his government for corruption, maladministration and “lack of justice.”

The developments point to the sensitivity of the Darfur conflict for the military that arrested al-Bashir after four months of deadly street demonstration against his 30-year rule.

The protesters rejected ibn Ouf’s leadership because he was head of military intelligence during the brutal campaign to suppress the Darfur insurgency in the 2000s. The United States has imposed sanctions on him since 2007, saying he armed and directed pro-government militias known as the Janjaweed, accused of widespread atrocities against civilians and rapes during the conflict.

The move also underscores the limits on the reach of the International Criminal Court. On Friday, ICC judges rejected a request by the court’s prosecutor to open an investigation into war crimes and crimes against humanity in Afghanistan and alleged crimes by U.S. forces there, in part because the U.S., Afghan government and Taliban are not expected to cooperate.

In the Darfur conflict, rebels among the territory’s ethnic Central African community launched an insurgency in 2003, complaining of discrimination and oppression by the Arab-dominated Khartoum government. The government responded with a scorched earth assault of aerial bombings and unleashed the Janjaweed. Up to 300,000 people were killed and 2.7 million driven from their homes.

Along with al-Bashir, the ICC has indicted two other senior figures in his regime — Abdel-Rahim Muhammad Hussein, who was interior and defense minister during much of the conflict, and Ahmed Haroun, a senior security chief at the time who last month was named by al-Bashir to run the ruling National Congress Party.

Both were among those reported by the Sudanese media to have been arrested Thursday in a sweep by the military against al-Bashir’s inner circle. Zein Abedeen confirmed the media reports Friday without specifying the two men.

An ICC spokesman declined to comment on al-Bashir’s case. On Thursday, Amnesty International and Human Rights Watch urged the Sudanese military to hand over the ousted leader. “Victims of the gravest crimes in Darfur should not have to wait any longer for justice,” said Jehanne Henry, associate director at Human Rights Watch.

Meanwhile, Zein Abedeen sought to reassure protesters who, while celebrating al-Bashir’s removal, oppose the military’s seizure of power. After ousting the president, the military announced it would rule the country for two years through a transitional council. It also suspended the constitution, dissolved the government, declared a three-month state of emergency and imposed a night-time curfew.

Protest organizers have vowed not to end their street action until a civilian transitional council is formed, saying rule by military commanders who for years were al-Bashir loyalists is just an extension of his regime.

The curfew and state of emergency have raised fears the military could eventually disperse the sit-in by force. But at least initially, it appears to be trying to persuade protest organizers to end the campaign.

Speaking at a news conference aired live on state TV and flanked by other uniformed officers, Zein Abedeen insisted the army has no ambition to hold the reins of power for long.

“If within a month, Sudan became able to run itself without chaos, we are ready to leave even after a month. The maximum is two years,” he said. He said the military would only appoint the defense and interior ministers in any transitional government and would not interfere.

But protest organizers rejected the military’s assurances, calling them “deception and farce.”

The Sudanese Professionals Association, which has spearheaded the four months of demonstrations against al-Bashir, said the “coup leaders … are not eligible to bring change,” and repeated demands for the “immediate handover of power to a civilian transitional government.”

At the sit-in, the mood was festive. Some protesters brought in mattresses, fans and even air conditioners, while others swept the streets to keep them clean, signaling they intend to stay long-term. As thousands of Muslim worshippers lined up in the street to hold prayers, Christians among the protesters held blankets over them to shade them from the sun in a show of solidarity.

There were also signs of cracks among al-Bashir’s former loyalists. On Friday, the commander of Sudan’s feared Rapid Support Force, a paramilitary force, expressed support for the protesters, saying the forces will not “accept any solutions rejected by the Sudanese people” and called for dialogue so Sudan would “avoid slipping into chaos.”  /muf