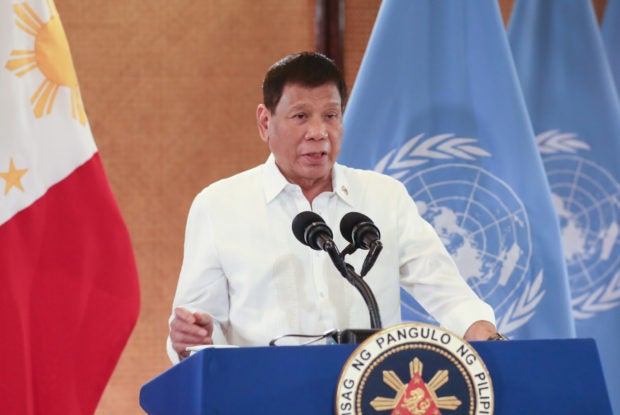 RODY SPEAKS TO THE WORLD President Duterte speaks to an online session of the UN General Assembly on Wednesday. —MALACAÑANG PHOTO

MANILA, Philippines — The government will not keep from the public the results of the ongoing review of President Rodrigo Duterte’s war on drugs, Justice Secretary Menardo Guevarra said on Wednesday.

Guevarra gave the assurance following the President’s latest directive to the review panel headed by the Department of Justice (DOJ), which he announced in a recorded video address before the 76th United Nations General Assembly on Tuesday.

“His instruction to the DOJ and the [Philippine National Police] to review the conduct of the campaign against illegal drugs … is a clear directive to pursue with greater vigor the ongoing review of drug death cases and to commence legal actions if found warranted,” Guevarra said.

“Based on what he said, the President wants the DOJ to take further action in collaboration with the PNP,” he added.

Asked to elaborate, Guevarra said: “It could mean ‘determine (the) criminal liability’ (of erring policemen).”

The President told the UN General Assembly that anyone found to have “acted beyond bounds” in his campaign against illegal drugs would be held accountable under national laws, while appearing to reject an International Criminal Court (ICC) probe.

According to Mr. Duterte, he instructed the DOJ and the PNP to review the conduct of the campaign, in which more than 6,100 suspected drug dealers and users have been killed since he took office in June 2016.“Those found to have acted beyond bounds during operations shall be made accountable before our laws,” he said.

The President made no mention of a formal investigation into possible crimes against humanity, which was approved by judges from the ICC last week, although he appeared to reject outside interference in human rights issues.

“Meaningful change, to be enduring, must come from within. The imposition of one’s will over another—no matter how noble the intent—has never worked in the past. And it never will in the future,” Mr. Duterte said. Earlier, Guevarra told reporters that the President might discuss before world leaders the recommendations submitted to him by the review panel last week.

“(But the President) just had a few minutes to speak. So every sentence counted,” he said.

Pressed for a copy of the panel’s initial findings, Guevarra said he would have to meet first with PNP chief Gen. Guillermo Eleazar to talk about their recommendations before providing the documents to media.

“Then we’ll inform all of you. We just want to do things the proper way,” he explained.

“By next week, you’ll probably know where this is going. So please have a little patience. We’re not doing things in secret,” he said.

Presidential spokesperson Harry Roque had said that the government would not cooperate with the ICC or allow any investigators into the country.

Mr. Duterte and police officials have insisted that the killings were in self-defense and the ICC has no right to meddle in the country’s affairs.

Rights groups say the President personally incited deadly violence in the drug war and accuse police of murdering unarmed suspects on a massive scale. They claim the police summarily executed suspects, which the PNP denies.