Afghan asylum-seekers have not yet submitted applications, says Guevarra 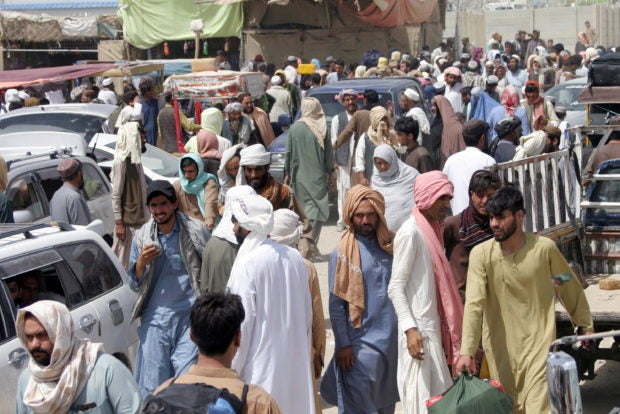 MANILA, Philippines — The Department of Justice (DOJ) has not received any refugee status applications from Afghans who evacuated their country amid the civil unrest brought by the Taliban’s take over, Secretary Menardo Guevarra said on Wednesday.

Guevarra told reporters in a message that the Afghan nationals in the country right now are just staying temporarily, which means that they are just waiting for their permanent relocation.

“So far, there have been no applications with the DOJ for grant of refugee status to Afghan nationals fleeing from their country,” the Justice Secretary said.

“Right now we have admitted only a handful, but they are here only for temporary shelter until they are permanently resettled elsewhere,” he added.

Guevarra noted that Afghan nationals do not need to apply for refugee status if they temporarily stay in the country.

The Afghan nationals who are here are slated for resettlement in another country.  So they need not apply for refugee status in the Philippines,” he explained.

Duterte instructed the DOJ to coordinate with the United Nations High Commissioner on Refugees (UNHCR) for a cooperation program regarding the acceptance of refugees, including those from the Rohingya who moved out of Myanmar.

“As one global community, we must do our utmost to help the Afghan people and all those who continue to suffer,” the President said.

“For the Rohingyas, I have instructed our Department of Justice to work closely with the UN High Commissioner on Refugees to prepare a cooperation program for a specific number of Rohingyas, consistent with our capacities,” he added.

Guevarra said that also no request had been made from the Rohingyas as of now.

“Nothing yet on Rohingya.  As instructed by the president, the DOJ will coordinate with the office of the high commissioner for refugees to find out how we can help,” Guevarra said.

Several Afghan refugees are temporarily taking shelter in the Philippines after evading the Taliban’s ascension to power again, with the democratic government being overthrown swiftly.

Foreign Affairs Secretary Teodoro Locsin Jr. confirmed last September 9 that several families have already made their way into the Philippines to avoid the conflict in their home country.

Taliban’s assumption of control of the landlocked country comes after almost 20 years since forces led by the United States overthrew it.

READ: How did the Taliban take over Afghanistan so quickly?

During the early parts of the Taliban’s assumption, people were seen in panic as forces marched into Kabul, with men and women hoarding airports in hopes of getting a flight away from the country.  Despite this, the Taliban has vowed to observe a peaceful transition.