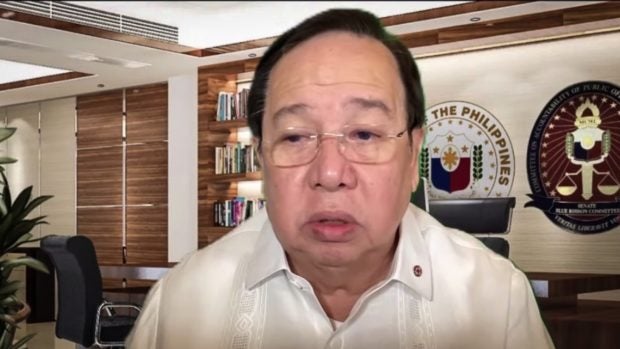 Sen. Richard Gordon presides over the teleconference hearing of the blue ribbon committee on Tuesday, Sept. 21, 2021, on the procurement of allegedly overpriced face masks and other personal protective equipment (PPEs) by the Department of Health (DOH) through the Procurement Services of the Department of Budget and Management (PS-DBM). (Photo from a video of the Senate Public Relations and Information Bureau)

MANILA, Philippines — Pharmally Pharmaceutical Corp. and its face mask supplier made a profit of almost P5 million on its first contract with the Procurement Service of the Department of Budget and Management (PS-DBM), according to receipts presented on Tuesday at the hearing of the Senate blue ribbon committee.

Senators learned at the hearing that Pharmally’s supplier of face masks got the items from yet another supplier.

It was earlier disclosed that Pharmally, through its director, Linconn Ong, tapped Tigerphil Marketing to supply it with 500,000 surgical masks that it would deliver for its first contract with the PS-DBM.

“It [Pharmally] should have been disqualified from the very beginning,” Gordon said. “It’s unqualified. It  really served no purpose.”

READ: Pharmally exec admits getting face masks at P23 each from ‘Brother Tiger’ to supply gov’t

Gordon then presented two receipts, one of which showed that Tigerphil Marketing bought the face masks it sold to Pharmally from Greentrends Trading International Inc. 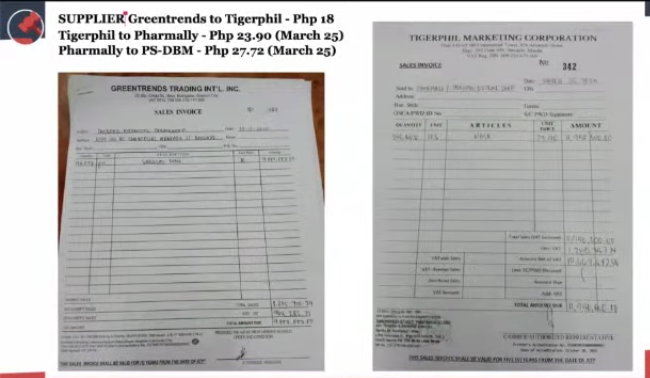 Pharmally then charged the PS-DBM P27.72 for each mask for a total amount of P13.86 million, Gordon noted.

“Tigerphil profited for P2.95 million and Pharmally profited for P1.9 million’ That’s what came out of our computation,” Gordon said.

The blue ribbon panel is investigating the controversial procurement by the PS-DBM of allegedly overpriced personal protective equipment (PPE), face masks, and shields on behalf of the Department of Health (DOH) in 2020.

At the center of the probe is Pharmally, which was awarded over P8.6 billion worth of government contracts last year.

DOH got masks for a lower price

Earlier in the hearing, some senators again questioned why the DOH transferred P42 billion to the PS-DBM for the purchase of pandemic response supplies.

Gordon noted that the DOH was previously able to buy face masks at P16 apiece, much lower than Pharmally’s unit price.

“Why could you not have done that all the way?” Gordon asked.

Health Secretary Francisco Duque III explained that the DOH was “overwhelmed” by the task of procurement at the time due to personnel getting sick and having to be put under quarantine amid rising cases.

“We were overwhelmed. In 2019, nobody knew really that there would be a pandemic. So we had no time to expand our bids and awards committee capacity, And yet people were pressuring us, and we saw cases were rising, people getting intubated, isolated. The health care system was going to collapse,” he said.

“We trusted the PS-DBM. If I couldn’t trust PS-DBM, who would I trust under the most difficult circumstances?” Duque stressed.

But Sen. Risa Hontiveros maintained the DOH would be the most capable in handling the procurement of medical items.

“Even if the PS-DBM had 10 BACs, they did a really bad job with Pharmally,” she said.

Sen. Francis Pangilinan was also puzzled as to why the PS-DBM used the DOH price ceiling of P28 per face mask when it was making bulk purchases.

He pointed out that the price ceiling set by the DOH only applies to retail purchases.

“And yet the PS-DBM used the SRP [suggested retail price] as the basis for wholesale purchases. That is why [it’s] overpriced.”