Several factors, like patients recovering, may have led to ‘false negative’ tests – PRC 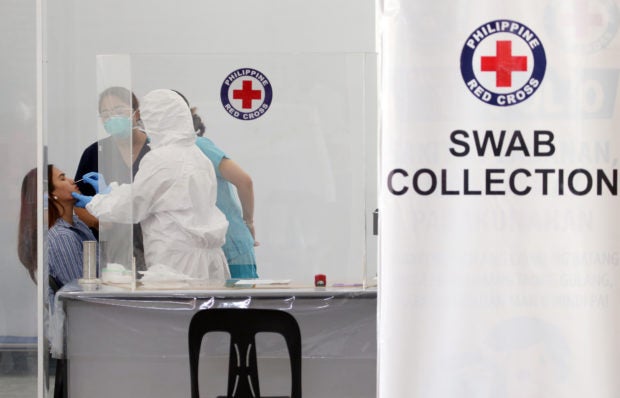 A woman avails herself of the COVID-19 testing offered by the Philippine Red Cross at its Mandaluyong headquarters. (File photo by EDWIN BACASMAS / Philippine Daily Inquirer)

MANILA, Philippines — Several factors — like patients already recovering from COVID-19 or the long time it takes for samples to be transferred from test site to laboratory — may have contributed to the ‘false negative’ results of 49 health workers in Subic Bay, the Philippine Red Cross (PRC) said in a statement issued on Tuesday.

The PRC also clarified that it was not in charge of collecting the specimens that came out as positive, which might be another variable in varying results.

President Rodrigo Duterte and some members of the House of Representatives questioned the allegedly “false negative” results after most of the 49 health workers in Subic who at first tested positive for COVID-19 turned out to be negative — with only five of them being actually infected.

“Clients may have truly been negative already by the time their second sample was taken.  The sampling method (in this case, sampling was performed by Baypointe Hospital personnel), test kits, extraction method, and the thermocycler (PCR machine) used by the testing laboratory are also factors that may influence the results,” it added.

According to PRC, the tests mentioned were subjected to a rerun by its molecular laboratory in Subic — as mentioned earlier by the PRC chair, Sen. Richard Gordon.

“This is an example of a situation where the PRC, on its own initiative and at its own expense, requires an automatic rerun by its molecular labs in order to ensure the accuracy of results,” the PRC noted.

Gordon spoke during the Senate blue ribbon committee hearing earlier to counter claims by lawmakers — among them, Rep. Rodante Marcoleta of the Sagip party-list group who expressed concern over the issue.

In the hearing, Gordon explained that the PRC would automatically do a retesting if a high number of patients tested positive.

Marcoleta — whom Gordon called the “demolition expert” behind the rejection of ABS-CBN’s new franchise application — called out the PRC during a House hearing last Mondy, saying that the government should look into the issue.

Later that day, Duterte asked DOH to probe the alleged “false positive” COVID-19 tests from the PRC.  He also asked Gordon if he had diverted his pork barrel to the organization.

READ: Duterte asks Gordon if he diverted millions of his pork barrel to Red Cross

Gordon also told Health Secretary Francisco Duque III that the PRC would be to an investigation on the issue as it had always submitted test results to the Department of Health (DOH) and the Research Institute for Tropical Medicine (RITM).

Marcoleta and Duterte started criticizing Gordon and PRC came after the Senate blue ribbon committee launched a probe into the P8.7 billion worth of contracts granted by the Procurement Service of the Department of Budget and Management (PS-DBM) to Pharmally Pharmaceutical Corp. despite the firm having only a startup capital of P625,000.

The Senate hearings have implicated several administration allies, like Chinese businessman Michael Yang, who was a former Duterte economic adviser.