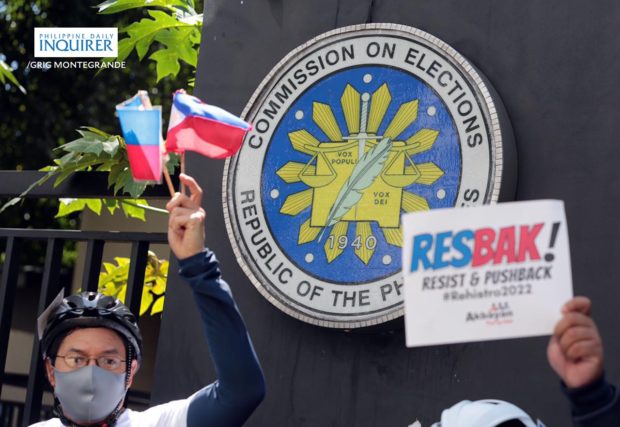 Akbayan Partylist waves flags and signs, urging Filipinos, especially first-time voters, to register for the 2022  elections during a “bicycle action” in front of the Comelec office in Quezon City on Thursday, June 10, 2021. The group also called on voters to push back against authoritarianism by not electing them in office. (File photo by GRIG C. MONTEGRANDE / Philippine Daily Inquirer)

MANILA, Philippines — The Senate is eyeing a possible cut in the 2022 budget of the Commission on Elections (Comelec) to compel it to extend the voter registration period for one more month. Or else it may pass a one-sentence bill simply mandating the extension.

During Monday’s plenary session, Senate Minority Leader Franklin Drilon proposed those “two remedies” to push the poll body into heeding the mounting calls to allot more days for the registration of voters.

The chamber has already adopted Senate Concurrent Resolution No. 17 urging Comelec to extend the voter registration period from the original deadline of Sept. 30 to Oct. 31 in order to prevent the disenfranchisement of voters.

Should Comelec refuse, however, to consider “this very strong expression of sentiment by the policy-making body of the government,” Drilon first suggested cuts in the poll body’s 2022 budget.

“Would the good sponsor consider urging the [finance] subcommittee handling the Comelec budget to call the Comelec to a hearing this week and express this need to extend the registration under pain of their budget being slashed to the barest minimum? That’s part of check and balance,” the minority leader said, addressing Sen. Francis Pangilinan, who sponsored the resolution.

“If they refuse to exercise a discretion which is consistent with public interest, I think there’s a valid point in denying them the appropriations of certain public funds when their very action will be contrary to public interest,” Drilon added.

Pangilinan backed Drilon’s proposal, saying that not extending the voter registration would lead to “massive disenfranchisement.”

The other remedy Drilon proposed is the passage of a one-sentence bill.

“We may be able to pass this bill a one-sentence bill which will simply say the registration is extended to October 31, 2021,” the minority leader said.

“Pass it on Wednesday. Send it to the House, and hopefully, we can have it approved before we adjourn [in October]. Send it to the president for signature. It’s up to him whether or not to sign it,” Drilon added.

As long as no senator objects, Senate President Vicente Sotto III said this would be possible.