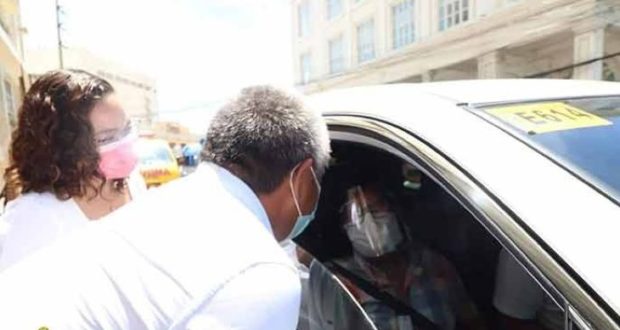 DROPPING BY Cebu City Mayor Edgardo Labella is shown in this photo released by the Public Information Office on Sept. 3 dropping by the City Hall grounds but only staying inside his car. Talking to him are City Administrator Floro Casas Jr. and Mary Rose Lubino, chief of staff of the mayor’s office. —PHOTO COURTESY OF THE CEBU CITY PUBLIC INFORMATION OFFICE

Vice Mayor Michael Rama on Monday said he received a written communication from the Office of the Mayor, designating him as the acting mayor from Sept. 20 to Oct. 7.

No specific medical condition was disclosed.

“With due respect to Mayor Labella, I kept on texting or calling him but never got a response,” said Rama, who belongs to the same political party as Labella.

Rama said he would nonetheless communicate with City Administrator Floro Casas Jr. to ensure that the city’s operation and delivery of services would continue unhampered. “Please join me in wishing our beloved mayor’s … complete healing as he gives attention to his medical concern in the next two weeks,” he told a news conference on Monday.

Labella first took a three-day medical leave in January after he got an ear infection, followed by another three-day leave starting on May 31 after he was hospitalized for “slight pneumonia.”

On June 9, he took a three-week medical leave to fully recover from sepsis, or blood infection. Over a month later, on July 14, he went on a three-day leave due to “persistent cough” and later extended his leave until Aug. 18.

The mayor’s fifth leave happened from Sept. 2 to Sept. 7.

Casas announced that Labella was back at the city’s helm on Sept. 8 but had to work from home.

Labella’s son Jaypee subsequently confirmed to local broadcaster Bobby Nalzaro that his father suffered a mild stroke while being hospitalized in August.

He said his father’s speech and lower extremities were affected but said the mayor was already in “good shape and in the process of recovering.”

Casas has also repeatedly assured that Labella was doing fine and has been functioning as mayor even if he worked from home.