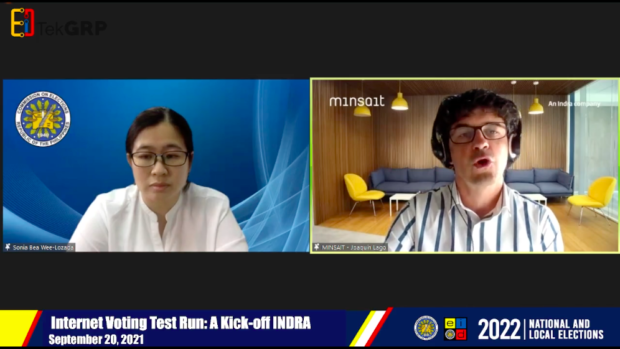 MANILA, Philippines — The Commission on Elections (Comelec) will start its final round of internet voting test run for overseas Filipinos this weekend, the Office for Overseas Voting said during its launch on Monday.

The test run will be conducted with information technology company Indra Sistemas from Sept. 25, 8 a.m. (Manila Time) to Sept. 27, 8 a.m. Indra is the third and last election solutions company in the Comelec’s series of internet voting test runs.

According to Comelec’s Office for Overseas Voting Director Sonia Wee-Lozada, the same 669 registered voters for the first two test runs will participate in this event.

“If the test voters were not able to submit or to onboard within the period starting today until Friday midnight, they will not be able to cast their votes during the 48-hour [test] period,” said Wee-Lozada.

This, according to Wee-Lozada, is different compared to the first two companies’ — Voatz and Smartmatic — test voting activity, which allowed voters to register up until the last minute of the voting period.

Voters are also not allowed to forget their passwords during Indra’s voting test run, as no technical support will be offered during the activity. Meaning, forgetting your password means you won’t be able to cast your votes.

Voatz finished its test run on Sept. 13 with a voter turnout of 52.01 percent.

Comelec said it hopes the voter turnout will be higher in the last round of the internet voting test runs.