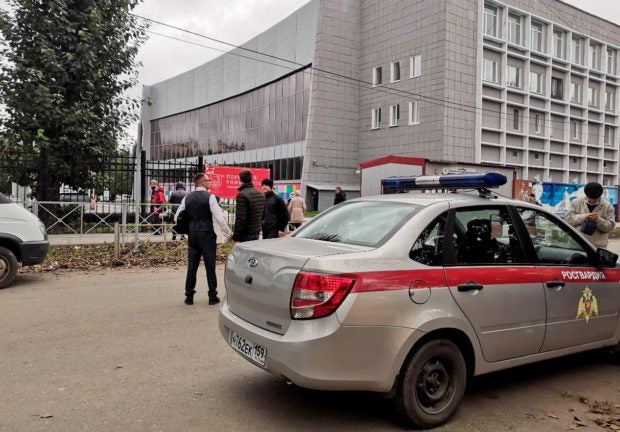 A car of Russia’s National Guard is seen at the scene after a gunman opened fire at the Perm State University in Perm, Russia September 20, 2021. REUTERS

MOSCOW — A student opened fire at a university in the Russian city of Perm on Monday, killing at least eight people and wounding several, law enforcement said.

The gunman was himself killed after the shootings at Perm State University, around 1,300 km (800 miles) east of Moscow, Natalia Pechishcheva, a university spokesperson, said.

“He was liquidated,” she said. Footage from the scene showed his prone body on the ground outside.

Earlier media footage from the scene showed students jumping from first-floor windows to escape the building, landing heavily on the ground before running to safety.

Students built barricades out of chairs to stop the shooter from entering their classrooms, they said.

The gunman was identified as a student at the university, the Investigative Committee, that handles probes into major crimes, said.

“There were about 60 people in the classroom. We closed the door and barricaded it with chairs,” student Semyon Karyakin told Reuters.

Local media identified the gunman as an 18-year-old student who had earlier posted a social media photo of himself posing with a rifle, helmet and ammunition.

“I’ve thought about this for a long time, it’s been years and I realized the time had come to do what I dreamt of,” he said on a social media account attributed to him that was later taken down.

He indicated his actions had nothing to do with politics or religion but were motivated by hatred.

Russia has strict restrictions on civilian firearm ownership, but some categories of guns are available for purchase for hunting, self-defense or sport, once would-be owners have passed tests and met other requirements.

The shootings were the latest in a series.

Earlier this year a lone teenage gunman opened fire at a school in the city of Kazan in May, killing nine people and wounding many more.

That was Russia’s deadliest school shooting since 2018 when a student at a college in Russian-annexed Crimea killed 20 people before turning his gun on himself.

Russia raised the legal age for buying firearms from 18 to 21 after the Kazan shooting, but the new law has yet to come into force.

3 dead in axe and gun attack at Russian military base

Read Next
Marcoleta stops queries on Yang’s citizenship, says they’re unrelated to the hearings
EDITORS' PICK
PH study shows 1 in 4 COVID patients at risk for stroke
Climate Change Commission and Nestlé PH to discover sustainability-focused solutions
Legarda emphasizes role of ICC/IPs in nation building this IP month
Work-From-Home is here to stay and requires reliable logistics
Print media group seeks tax breaks
SC asked to compel gov’t action vs plastic pollution
MOST READ
Drivers now required to take driver’s education upon license renewal – LTO
Gordon to Duterte: You? Teaching me courtesy?
Can Marcos Jr. be disqualified?
Marcos Jr’s ‘special diploma’ from Oxford: You can have it, too
Don't miss out on the latest news and information.