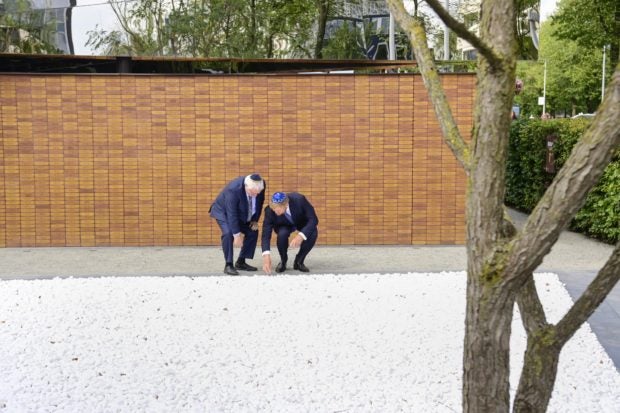 Dutch King Willem-Alexander (R) flanked by the chairman of the Dutch Auschwitz Comity Jacques Grishaver (L) attend to the inauguration ceremony of the Holocaust Memorial of Names in Amsterdam, on September 19, 2021. AFP

AMSTERDAM — A Holocaust memorial inscribed with the names of more than 102,000 Dutch Jews killed during World War II was inaugurated in Amsterdam over the weekend.

Consisting of a brick labyrinth topped with mirror-like stainless steel, which forms the letters of a Hebrew word meaning “in memory of”, every brick has the name of a victim inscribed on it, along with their date of birth and the age they were when they died.

“It was moving. I just saw the name of one of my friends,” survivor Jacqueline Ruud told AFP.

“I still have a photo of her at home,” adding that she also had known the country’s most famous Holocaust victim, the diarist Anne Frank.

“This memorial makes us face up to our responsibility,” caretaker Prime Minister Mark Rutte said at the ceremony on Sunday, which the Dutch king also attended.

“Responsibility of whether more should have been done to save people during the war… responsibility for the icy welcome that greeted the small group that returned from the hell of war.”

“It’s a dark page in the history of our country,” he said.

Many Dutch citizens, along with the police and railways, actively collaborated with the German occupation to round up Jews and send them to concentration camps.

More than two-thirds of the country’s 140,000 Jews were killed, along with 220 Siti and Roma, whose names are also included on the memorial.

In January 2020 Rutte apologized on behalf of the Dutch government for the persecution of Jews during World War II, the first time the country has offered such an apology.

“(The monument) does exactly what it is supposed to. It brings all these people, whose lives were taken, out of oblivion,” Jacques Grishaver, president of the Dutch Auschwitz Committee, said at the site’s opening.

“From now, it stands as a memorial that will never be erased. As a reproach to those who let it all happen. And as a warning, forever,” he added.

The new landmark was designed by Daniel Libeskind, himself the son of a Holocaust survivor, who is also the architect behind the Jewish Museum in Berlin and the redesign of the World Trade Center site in New York.

The monument’s construction has been the subject of controversy over the years.

Residents had complained it was “too large” and had contested the planning permit, but an Amsterdam court ruled in favor of the municipality.