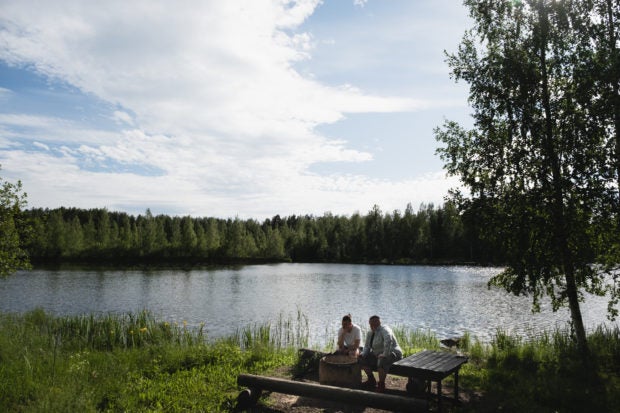 Leevi Natunen (L) and Miika Leikas, both 19 years old, spend some time on the lakeshore in Enonkoski, Finland on June 17, 2021. – The village of Enonkoski in eastern Finland may look picturesque with its river and tall wooden church, but it is suffering from an exodus of young women. AFP

ENONKOSKI, Finland — With its wooden church, tall pines and babbling river, the village of Enonkoski in eastern Finland looks like a dream come true for those seeking to escape the stress of big cities.

But for many young women, the village actually equates with boredom and lack of opportunities and they have left in droves, an exodus that is being replicated all over the Finnish countryside in a concern for authorities.

Viivi Rinkinen is one of those who left, moving to Joensuu, a city two hours away, at the age of 16 to start high school.

“It was kind of boring, I wanted some action,” she told AFP, now aged 25 and living in Malta.

“All my female friends also moved away.”

In the 1,400-strong village, men outnumber women two-to-one in the 15-24 age category. Just 28 women in that age bracket remain.

According to official data, over half of rural municipalities in Finland now have fewer than 81 women aged 15-24 for every 100 men of the same age, as they leave in pursuit of higher education or skilled jobs.

Finnish girls often outperform boys in school and are more likely to go on to study at higher levels, frequently in a larger town.

And in rural areas where the agriculture and construction industries dominate, jobs for highly-skilled women are scarce.

“The girls aren’t interested in working on the farms, unlike us boys,” he said.

His friend Leevi Natunen, a trainee forestry machine operator, added that he and Leikas just wanted to stay where they grew up.

“We don’t fancy leaving and testing the waters,” he said.

This migratory trend already existed, but better data and increased awareness mean that “it’s being talked about more nowadays,” according to Aro.

The exodus of young women is speeding up an already drastic process of depopulation in rural Finland.

Faced with the drain of skilled youngsters and a growing elderly care bill, some rural municipalities are looking for ways to retain or lure back young women.

In remote Kainuu in the centre of the country, authorities polled 500 local young women about their reasons for leaving.

“It’s natural that people leave elsewhere to study, but our problem is how to get them back afterwards.”

Half of young women felt they were not listened to in local decision-making, and many cited a perceived intolerance towards different ethnicities or sexual orientation.

Komulainen and her colleagues are teaming up with local businesses and politicians to try to create more job and apprenticeship opportunities for young women, and boost their participation in local politics.

A PR campaign with a specially written song, “Longing for Kainuu”, aims to promote a more inclusive, dynamic image of the region.

The young men who stay behind in rural areas but fail to find work often complain of social exclusion.

“If they have no schooling and no work, it’s easy for the young people here to become marginalized,” said Minna Laurio, Enonkoski’s mayor, who herself left the village before coming back.

“It can lead to things like alcohol misuse and challenges in staying in control of your life.”

Official data show that Finnish men under 24 are more likely than women to be without education, employment or training, an issue that is most acute in rural areas.

“One problem is the services are gradually being relocated to the big cities, so you can’t get help as fast,” said Markus Lindroos, a youth worker in neighboring Heinavesi.

“I’d like the government to understand that there’s life outside the Helsinki ring road.”

Laurio said a shift to remote working in the wake of the coronavirus pandemic might help change perceptions.

But 22-year-old Atte Tuominen, a trainee sports instructor in Heinavesi, said he was not too bothered by the absence of women.

“My friends and I spend a lot of time together doing sports, fishing and other outdoor things,” he said.

“There are still girls in towns nearby, you don’t have to go far.”