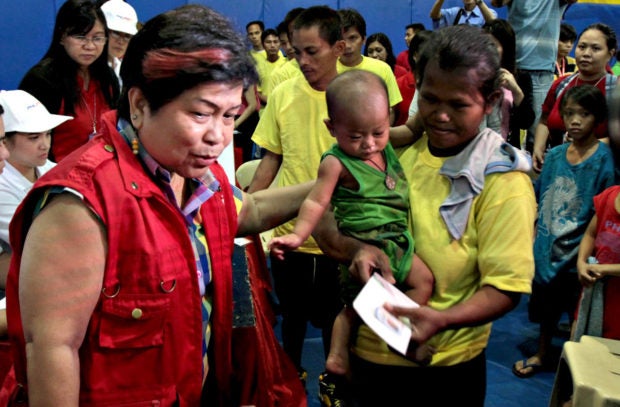 HEART IN THE RIGHT PLACE: Whether she was distributing cash aid to the poor or food packs to typhoon victims, then Social Welfare Secretary Corazon “Dinky” Soliman “embraced human suffering and made it her own,” according to her former colleague, Bro. Armin Luistro. (File photo by GRIG C. MONTEGRANDE / Philippine Daily Inquirer)

MANILA, Philippines — Despite being the smallest among the Cabinet members of former President Benigno “Noynoy” Aquino III, Corazon Victoria Soliman, known to many as “Dinky,” easily stood out, and not just because of the bold streaks of color in her hair.

As the secretary of the Department of Social Welfare and Development (DSWD), Soliman was one of the few women who held a high-ranking post under the past administration.

Although her stint in government was not without controversy, her friends and political allies said her work was deeply rooted in a commitment to uplifting the poor as a “social worker by heart.”

Soliman passed away on Sunday morning due to complications from renal and heart failure. She was 68.

In August, she contracted COVID-19, along with her husband Hector and several family members, but recovered.

“Secretary Dinky was pure of heart, humble and compassionate,” Vice President Leni Robredo said in a Facebook post, adding that Soliman had volunteered to keep her company during the search operations for her husband, Jesse, whose plane crashed in 2012. “[She] was one of Jesse’s most admired public officials,” Robredo said.

Before entering government, Soliman was a community organizer and an activist against the martial law regime. In 2001, she was appointed as DSWD secretary by Gloria Macapagal-Arroyo, who was swept to the presidency in the wake of the second People Power Revolution.

But the “Hello Garci” scandal that erupted after the 2004 presidential elections prompted Soliman to join the so-called Hyatt 10—seven Cabinet officials and three bureau chiefs—who quit their posts in protest. The group also demanded Arroyo’s resignation and accountability for allegedly rigging the polls to ensure her victory.

“It was clear to me that I was in government because of the principles and vision that I believed [Arroyo and I] shared,” she wrote in a postresignation letter. “While it is true that [Arroyo] appointed me to my post, my loyalty to the people is higher than my loyalty to her because ultimately, we are all accountable to the people.”

In her four years at the DSWD during Arroyo’s term, Soliman launched the Kapit-Bisig Laban sa Kahirapan-Comprehensive and Integrated Delivery of Social Services, a poverty alleviation program which empowered barangays and communities in target municipalities.

When she returned to the department in 2010 after being appointed by Mr. Aquino, she spearheaded the government’s flagship antipoverty program, the Pantawid Pamilyang Pilipino Program, a conditional cash transfer scheme for the country’s poorest.

But it took her four years to hurdle the Commission on Appointments after then Sen. Miriam Defensor Santiago sought to block her confirmation over her links to the Black and White Movement, a civil society group launched in mid-2005 to demand Arroyo’s ouster.

Toward the end of her term, Soliman faced several controversies in the relief efforts following the onslaught of Supertyphoon “Yolanda” (international name: Haiyan). In 2014, she confirmed the findings of the Commission on Audit that P2.7 million worth of food packs for survivors were lost to spoilage due to “improper handling.”

Florencio Abad, who served as budget secretary in the Aquino administration, said that Soliman did not take the criticism personally, but admitted that it made their work harder.

“While she accepted the chaos attending the relief and rescue response, she felt sad that the critiques refused to acknowledge the magnitude of the calamity they were facing,” he said. Still, he noted that “the criticisms did not slow her down.”

Colleagues described Soliman as indefatigable and consistent, despite the challenges of her work and even at the risk of her own health.

Bro. Armin Luistro, former education secretary under the Aquino administration, said that as a newcomer in public service, he looked up to Soliman as a mentor and as his closest comrade in government.

“I traveled with her in many relief operations after a calamity and experienced how she embraced human suffering and made it her own while seeking numerous and creative ways to respond to their needs with urgency,” he said. “In all those working visits, no one was ever intimidated by this ‘small woman with a big heart.’”

Soliman’s struggle for social justice defined both her personal and professional life, where one reinforced the other, Abad said.

“There must have been tension between her desire for a stable and quiet family life and her uncertain, demanding and delicate work for truth, justice and peace,” he said. “But she always knew where her priorities lay.”

Even after leaving the government, Soliman remained a steadfast ally and friend of Aquino, who passed away at 61 on June 24, as well as other Cabinet members.

Former presidential spokesperson Edwin Lacierda said they would keep tabs on each other since they were both diabetic. He even urged her to do intermittent fasting to manage their shared disease.

“Despite our busy schedule, we would find time to talk at least once a week and update each other on current political events,” Lacierda said. “Even when she was already sick, she would nonetheless be diligent in attending meetings for Tindig Pilipinas and with members of the urban poor.”

In the country’s political sphere with an affinity for colors, Soliman also proudly made statements through her signature look of hair streaks that changed in color depending on her mood and current life battles.

“Every time I feel like having some change in my life, I do something with my hair,” she said in a 2012 interview with the Inquirer.

According to her, these hues were reminders that transparency and accountability should be the norm in government.

Her look began as a political statement in 2000 during the impeachment trial of then President Joseph Estrada to hold him accountable to the people. She sported blue clip-on streaks to lift her spirits, she said.

At the height of the Hyatt 10 controversy, she turned to red and blue streaks. In 2010, after failing to find synthetic ones, she opted to finally dye her streaks yellow, the color of the Liberal Party.

In her years at the DSWD, she turned to red, which she said was the color of the agency.

In her final public appearance during the requiem Mass for Aquino, Soliman sported a pixie cut dyed purple.

In the often gray world of politics and bureaucracy, colleagues said the former social welfare secretary always knew how to bring light to the room, evidenced by her love for sunflowers.

That light was even reflected in Soliman’s Twitter handle: “dinkysunflower.” In a 2010 tweet, she wrote in response to questions behind the curious name: “Because sunflowers look up to the sun for optimism and hope.”