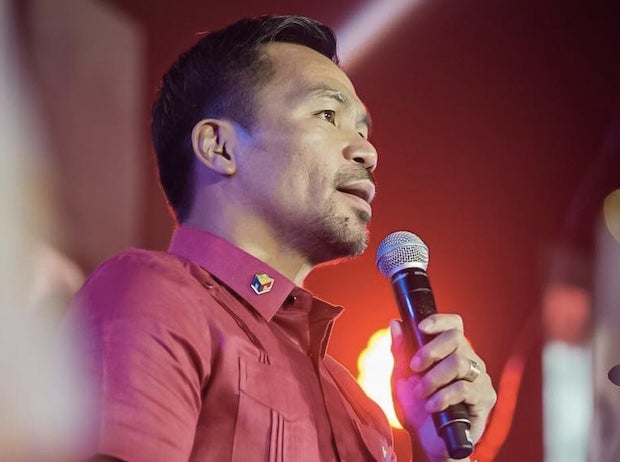 MANILA, Philippines — “Your time is up.”

Sen. Pacquiao issued that warning on Sunday to corrupt government officials in his speech accepting his nomination by his PDP-Laban faction as its standard-bearer in the 2022 presidential race.

“To those serving in our government who continue to take advantage of and steal from the national coffers, the time is near when you will be all together in prison. Your time is up,” Pacquiao said, speaking partly in Filipino.

Pacquiao announced his bid for the presidency amid the infighting within the PDP-Laban that lead to two factions forming — one led by him and Sen. Aquilino “Koko” Pimentel III and another led by Energy Secretary Alfonso Cusi.

Pacquiao said he opted to remain silent despite the issues being thrown at him by the Cusi camp.

“Right here inside my own party, the PDP-Laban — which I accepted, nurtured, and defended — some insist on destroying me for the sake of self-interest and politics,” Pacquiao said

“In spite of this, I am here now to show you that, more than the party, what’s important are principles and conviction. More than one’s self, the country must be the priority,” he added.

In his speech, Pacquiao also mentioned his past life of poverty.

“Do you know the feeling of a Filipino who fought as a boxer, who let himself be beaten up by a bigger and stronger opponent, just so he could buy food?” Pacquiao said.

“The Manny Pacquiao who is facing you now has been forged by poverty,” he added.