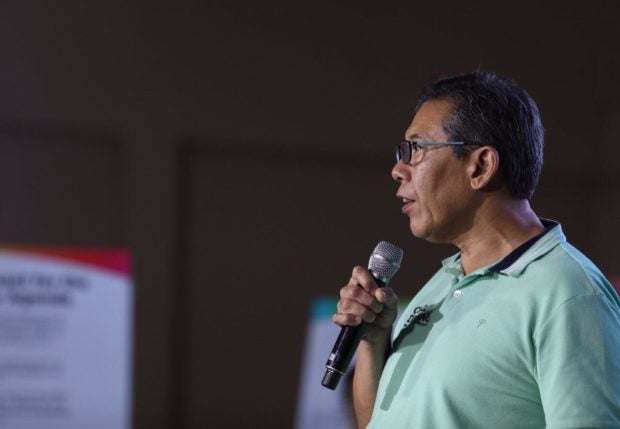 Chel Diokno, chairman of the Free Legal Assistance Group (Flag), is again running for senator in the 2022 elections. (File photo from Otso Diretso)

SANTA ROSA CITY, Laguna, Philippines — Human rights lawyer Chel Diokno is thankful for the outpouring of support he has been receiving from the entertainment industry following his announcement that he will throw his hat again into the senatorial race in the 2022 national elections.

In an interview on Saturday with “Sa Totoo Lang” of One PH, Diokno said he was “energized” by the backing of celebrities, among them TV host and comedian Vice Ganda, who has recently expressed his support in his social media accounts.

“I am really thankful to Vice and to other celebrities who are supporting me. I wasn’t expecting it. It’s a big surprise for me,” Diokno, son of the late former Sen. Jose “Pepe” Diokno, said in Filipino.

“For candidates like me with limited resources in terms of money and machinery, our hopes grow when there are celebrities who support us,” he added.

Posted by INQUIRER.net on Saturday, September 18, 2021

Diokno announced his senatorial bid on Wednesday, Sept. 15. Since then, aside from Vice Ganda, other celebrities have expressed their support — like Bianca Gonzales, Jason Abalos, and Janine Gutierrez.

Diokno, who is the chairman of the Free Legal Assistance Group, first ran for senator in 2019 under the opposition slate Otso Diretso, but he failed to secure a seat in the so-called Magic 12.