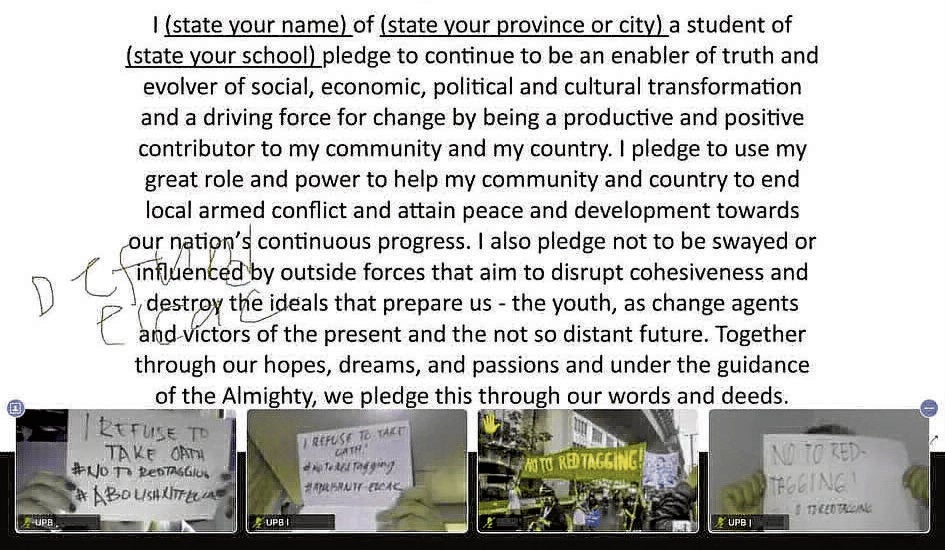 THE OATH Students in the Cordillera, in an online protest on Thursday, post a copy of the “oath” they were asked to make during a virtual seminar by the region’s task force to end local communist armed conflict on Sept. 5-16. —FACEBOOK SCREENGRAB

BAGUIO CITY—Several college students in the Cordillera region staged an online protest against what they described as “outright Red-tagging” of progressive groups during a webinar on peace convergence organized by the Cordillera Regional Task Force to End Local Communist Armed Conflict (RTF-Elcac) this week.

The students, who were asked to take an oath and pledge “not to be swayed or influenced by outside forces,” held a symbolic action on Thursday by raising placards calling for a stop to the attacks and Red-tagging of activists and youth organizations.

Gleanna Cuyugan, a graduating political science student of the Saint Louis University (SLU) in this city, said students were subjected to “a two-hour Red-tagging and harassment” during the forum held on Sept. 15 that was endorsed by the Commission on Higher Education-Cordillera Administrative Region (CHEd-CAR).

“It is enraging for CHEd-CAR to promote such an online forum in our institutions, when it is supposed to be a government agency mandated to protect and uphold our rights and security,” Cuyugan, also the spokesperson of the SLU chapter of militant Anakbayan, told the Inquirer by phone on Friday.

“In the photographs, the killed rebels looked like trophies being paraded by government forces, and they were saying that this is what will happen to student activists. It was very traumatic,” she said.

Cuyugan said the forum “puts students in danger, especially with the passage of the antiterrorism law, since legitimate protest actions can be tagged and charged as a terrorist act.”

“Students do not need a forum like this. It was an in-your-face kind of Red-tagging. It doesn’t help our situation, especially since tuition increases and exorbitant fees continue while families have a hard time coping with the pandemic,” Josema Mendoza, a third year nursing student at the University of the Cordilleras, said in a separate interview. The CHEd-CAR endorsed the forum in a memorandum on Sept. 2, saying it was to “educate students on the threat posed by terrorist organizations.”

Students and school officials from the various universities and colleges in the Cordillera were asked to join the forum.

According to Christopher Depnag, education supervisor 2 of CHEd-CAR, the forum was only coordinated with their office by RTF-Elcac officials.

The Inquirer tried but failed to reach Karen Mendoza, of the situational awareness and knowledge management commitee of Elcac, who led the orientation of students during the forum.

Depnag also refused to comment on the allegations that the students were Red-tagged during the forum, although he said their office was aware of the protest.