Construction of Kaliwa Dam pushed through even without permits — COA 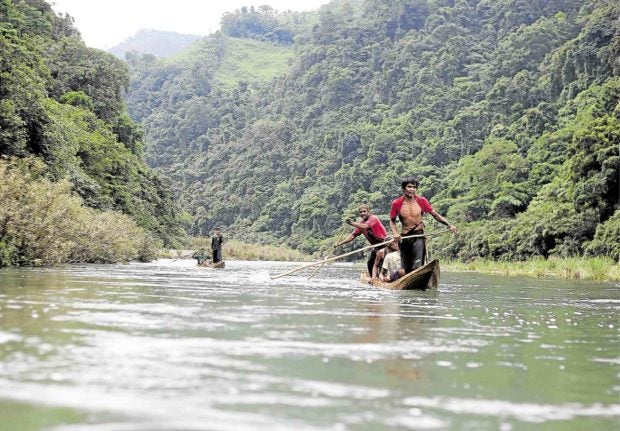 As their forebears have done, the Dumagat traverse the Kaliwa-Agos River in Barangay Magsaysay, Infanta, Quezon, as part of their daily routines. The government is planning to dam the Kaliwa River to make it into an alternative water source for Metro Manila, but the project will mean inundating what the Dumagat consider their ancestral domain. (File photo by RICHARD A. REYES / Philippine Daily Inquirer)

MANILA, Philippines — The construction of the controversial New Centennial Water Source Kaliwa Dam Project (NCWS KDP) was continued even without permits from the appropriate government offices, according to the 2020 audit report of the Commission on Audit (COA).

The Metropolitan Waterworks and Sewerage System (MWSS) is the government agency in charge of the Kaliwa Dam project, which is part of the New Centennial Water Source program that promises to deliver 600 million liters of water per day to Metro Manila.

According to COA, this may lead to the cancellation of the Environmental Compliance Certificate (ECC) issued by the Department of Environment and Natural Resources for the project (DENR).

The ECC only allows the MWSS to present measures that will mitigate the impact of the project on community health, welfare, and the environment.

The MWSS “may only proceed with the project implementation only after it has secured “necessary permits from other pertinent Government agencies,” the COA report said.

The contractor of the $283.2 project is the China Energy Engineering Corp. (CEEC), which has reportedly started the construction of the dam in spite of complaints from indigenous people who will be displaced.

According to COA, the MWSS and its contractor must first comply with the requirements of the National Integrated Protected Areas Systems Act and have a certification issued by the National Commission on Indigenous Peoples. It must also identify disposal sites of excavated materials, among others.

“The ECC is a conditional certificate, where MWSS needs to comply [with] 21 conditions and 4 restrictions that are subject to the approval/evaluation of DENR,” the COA report said.

If the requirements are not met, the COA warned that the ECC could be canceled, which would affect the effectivity of the loan agreement with China Eximbank and the contract with the contractor CEEC.

“We recommended that Engineering and Technical Group secure the necessary permits as required by the DENR for the implmentation of the NCWS KDP and the submission of the Compliance Monitoring ‘Report together with the supporting documents,” the COA said.

In 2019, the government secured a $283.2-million loan deal from China to build the dam, a flagship project under the Build, Build, Build program of President Rodrigo Duterte.

The project has generated a lot of criticism, with some people warning that the dam might destroy the ecosystem and the habitat of indigenous people in several Quezon province towns. Others said the deal would be disadvantageous for the country.

According to Duterte, the project is the “last resort” for Metro Manila’s dwindling water supply.

But the studies conducted by the Save Sierra Madre Network Alliance Inc. showed that the dam would end up displacing an estimated 1,465 indigenous families.

Meanwhile, MWSS chairman Reynaldo Velasco denied that the dam construction in the ancestral domain proceeded. According to him, the MWSS only pushed through with the construction outside the domain, which is not related to the Kaliwa Dam project.

(Only those unrelated to the dam and tunnel outside the ancestral domain were continued.)

He admitted that the agency has yet to secure some of the necessary permits for the Kaliwa Dam Project but claimed that the paperwork for its issuance is already done.

(The paperwork is done, just waiting for the permit.)