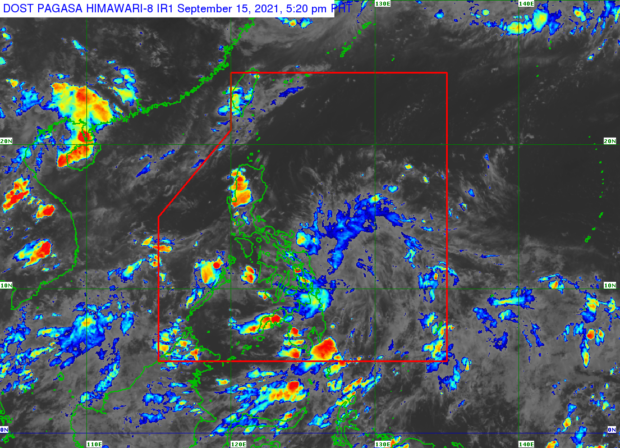 MANILA, Philippines — A low-pressure area (LPA) was spotted near Eastern Visayas right in the middle of the intertropical convergence zone (ITCZ), bringing rain in  Mindanao and some areas of the Visayas, the Philippine Atmospheric, Geophysical and Astronomical Services Administration (Pagasa) said.

(It is embedded in the ITCZ, which in turn affects large areas of the country, especially in Palawan in the Visayas and Mindanao.)

The LPA, however, is not expected to become a typhoon in the next 48 hours but is expected to pass through the Visayas and Southern Luzon.

(There is a possibility that it will escalate into a typhoon once it arrives in the West Philippine Sea.)

Meanwhile, generally fair weather is still expected to prevail in the entire Luzon as well as the Western and Central parts of Visayas on Thursday. The formation of isolated thunderstorms, however, should still be expected from the afternoon until evening.

(Widespread rains and thunderstorms are expected due to the impact of ITCZ and LPA in Eastern Visayas, as well as throughout Mindanao.)

The forecast temperature range in key cities/areas according to Pagasa:

Despite the effects of the ITCZ and a newly formed LPA, no gale warning is being issued as slight to moderate sea conditions are expected.