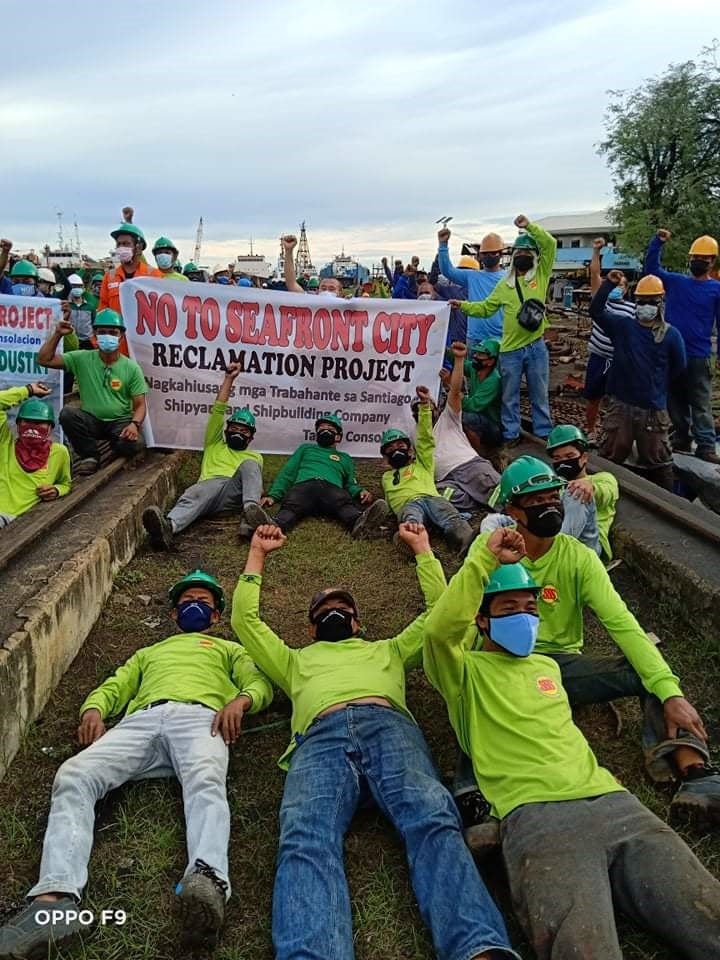 CEBU CITY––At least 3,000 workers are rising to save six shipyards that will be affected by the proposed 238.5-hectare reclamation project in Consolacion town in northern Cebu.

Jose Tomongha, chair of the Alliance of Progressive Labor, said they would also hold a signature campaign against the reclamation project.

He said they aimed to gather 5,000 to 8,000 signatures to disprove the local government’s claim that only a few workers and residents would be affected by the reclamation project.

Tomongha said other groups to be displaced by the reclamation project are fisherfolk, tricycle drivers, motorcycle-for-hire drivers, and vendors.

“If these groups lose their livelihood, how would they feed their families? If they no longer have work, their children will no longer go to school. If they are sick, they could no longer go to the doctor to be treated,” he said.

“I hope the local government will realize that. For the sake of the workers, please reconsider your decision,” he added in a message addressed to Consolacion Mayor Joannes Alegado.

The Inquirer tried but failed on Wednesday to reach the mayor. A text message sent to him was left unanswered as of 3 p.m.

In an earlier interview, Alegado said there was no stopping the local government from implementing the project, stressing that “we could not just stop our dreams because the shipyards will continue to operate from that area.”

He advised owners of the shipyards in the municipality to relocate to other areas.

Shipyard owners, however, learned about it only in January when the mayor’s mother, Vice Mayor Teresita Alegado, invited them to a public scoping that turned out to be a presentation for a project that was meant to eliminate their businesses.

In July, the shipyard owners sued the municipal officials after the local government refused to issue business permits that would allow them to continue operating in the wake of the town’s plans to reclaim their foreshore properties.

The trial court issued a status quo order and told the municipal officials not to close down the shipyards pending resolution of the petition for certiorari and prohibition filed against them.

Edward Ligas, a former commissioner of the Presidential Commission for the Urban Poor, who organized the protest actions, said the rallies were meant to express “strong opposition” against the reclamation project.

“We are praying that the mayor will recall or shelve the ambitious project. We already have lots of reclamations. We do not need another one,” he said in a separate interview.

The protest rallies that kicked off Saturday were participated by about 100 employees of PKS Shipyard inside the property in Barangay Tayud.

The following day, at least 130 employees of Fortune Shipworks Inc. gathered inside the vacant area of the shipyard to air their opposition against the proposed reclamation.

On Tuesday, the employees of Santiago Shipyard also held their protest action.

The other participants were workers from Colorado Shipyard, the Philippine Rigid Construction Corp., and Nagasaka Shipyard, who planned to hold rallies in the coming days.