UK to vaccinate over 12s against COVID-19 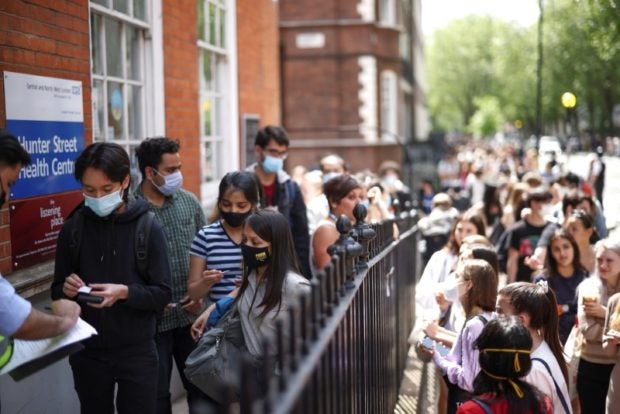 People queue outside a vaccination centre for young people and students at the Hunter Street Health Centre, amid the coronavirus disease (COVID-19) outbreak, in London, Britain, June 5, 2021. REUTERS FILE PHOTO

Britain has been one of the countries hardest hit by Covid-19, recording more than 134,000 deaths.

Despite a successful vaccination program, case rates remain stubbornly high due to the emergence of the Delta variant, and officials are anxious about them rising further now that schools have returned after the summer break.

“I have accepted the recommendation from the Chief Medical Officers to expand vaccination to those aged 12 to 15, protecting young people from catching COVID-19, reducing transmission in schools and keeping pupils in the classroom,” Health Minister Sajid Javid said.

The program will be rolled out at schools, with the consent of parents or guardians, according to the health ministry. It targets around three million children.

Vaccinating children has become a thorny issue, despite other countries pushing ahead with jabs for youngsters.

The Joint Committee on Vaccination and Immunization (JCVI), which advises UK health departments on immunization, currently says the “margin of benefit, based primarily on a health perspective, is considered too small to support advice on a universal program of vaccination of otherwise healthy 12 to 15-year-old children at this time”.

But the chief medical officers (CMO) of England, Scotland, Wales and Northern Ireland said earlier Monday that the vaccines should be made available, after taking into account wider issues such as education and mental health.

The CMOs said vaccinating 12-15 year-olds “will help reduce transmission of Covid-19 in schools”, with around three million children potentially eligible for the first dose of the Pfizer vaccine.

“Covid-19 is a disease which can be very effectively transmitted by mass spreading events, especially with the Delta variant,” they said.

“Having a significant proportion of pupils vaccinated is likely to reduce the probability of such events which are likely to cause local outbreaks in, or associated with, schools.”

Over four in five adults across the UK have received two doses of COVID-19 vaccine, with over half of 16-17 year olds coming forward for their first jab.

Chris Whitty, CMO for England, later told a news conference that it had been “obviously a difficult decision” but that “the disruption in education that has happened in the last period has been extraordinarily difficult for children”.

Whitty said that in the “great majority of cases, children and parents come to the same decision”, but accepted that there was “some debate” about what to do in the event of a clash between children and their parents.

Prime Minister Boris Johnson is due to present his government’s plans for tackling coronavirus during the winter months, amid fears of a spike in infection and the return of seasonal ailments which would put a further strain on the health service.