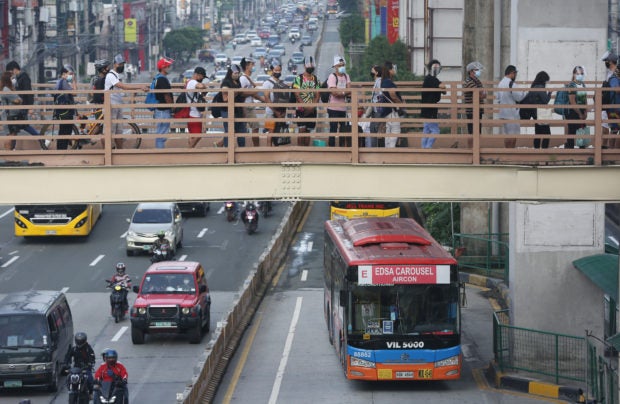 DAILY GRIND Essential workers and medical and other front-liners wait for a free ride at the Edsa bus carousel’s Roosevelt Station in Quezon City. The government is ramping up the procurement of COVID-19 vaccines, including booster doses, to protect a wider segment of the population and speed up the reopening of the economy.—NIÑO JESUS ORBETA

MANILA, Philippines — The government has started negotiating with major vaccine makers for the purchase of 90 million doses of COVID-19 vaccines as booster shots to be rolled out next year.

According to vaccine czar and National Task Force Against COVID-19 chief implementer Carlito Galvez Jr., the booster shots to be purchased are “reformulated” or “tweaked” so their efficacy would improve against the more transmissible variants of the SARS-CoV-2 virus.

He said the government was hoping to secure 61 million doses this month or by October, adding that the 190,000 backlog in the second jab or Component II of Russia’s Sputnik V vaccine would be delivered soon, after which “our contract will be remodeled so that we will be getting Sputnik Light instead… (or) the one-dose [vaccine].”

The country has fully vaccinated 16.7 million adults, according to Galvez. In the National Capital Region, Metropolitan Manila Development Authority Chair Benhur Abalos said 5 million or 60 percent of the population had been fully inoculated.

The National Vaccination Operations Center (NVOC), however, said the government had not been meeting its target of 500,000 shots daily. This target is expected to meet the goal of inoculating 70 percent of the country’s adult population.

Dr. Keiza Rosario, NVOC representative, said at the Laging Handa briefing: “The vaccine delivery [volume] differs on a weekly basis. There are times when it’s high, so those are the times that we reach as much as 700,000 daily. And if the supply decreases, we see that our daily performance also declines.”

“We expect now, with the more vaccines that will arrive this week, we can achieve better performance if we can have additional supplies,” she added.

Rosario said, “Our vaccination activities were not so much affected last week, the vaccination performance did not decline that much because this was also compensated in the other regions.”

As for the vaccination of minors and giving health workers booster shots, Rosario said the NVOC was still awaiting directives from the Department of Health (DOH).

The country’s pediatricians, however, said the adult vulnerable groups should still be the priority, despite the emergency approval granted to two COVID-19 vaccines for their use on adolescents.

“The adult and more vulnerable age groups should still be prioritized in the vaccination rollout, with the aim of equitable distribution among different regions of the country,” the Philippine Pediatric Society (PPS) and the Pediatric Infectious Disease Society of the Philippines (PIDSP) said in a statement over the weekend.

“Once the whole country has a sufficient percentage vaccinated in the priority adult groups, children 12 years old and above may be considered for vaccination,” they said.

The DOH reported 20,745 new coronavirus infections on Monday, bringing total cases since the start of the pandemic to 2,248,071.

But COVID-19 deaths have climbed to 35,307 after 163 more fatalities were reported, including 60 who were initially identified as recovered.

The positivity rate slightly went down to 26.7 percent, based on the 71,860 who were tested on Saturday. Five testing laboratories did not report to the DOH that day.

Meanwhile, eight out of 10 COVID-19 infections in the country are now likely caused by the Delta variant, according to the 748 cases analyzed by the University of the Philippines-Philippine Genome Center (UP-PGC) last week.

Of those cases, 640 or 86 percent were found positive for the highly transmissible variant.

The DOH said 584 of the Delta cases have no travel history. About one-fifth or 112 were based in Metro Manila, 52 in Cagayan Valley and 49 in Calabarzon, the department said.

Thirteen of the Delta cases have died, three are still infected while the rest have recovered.