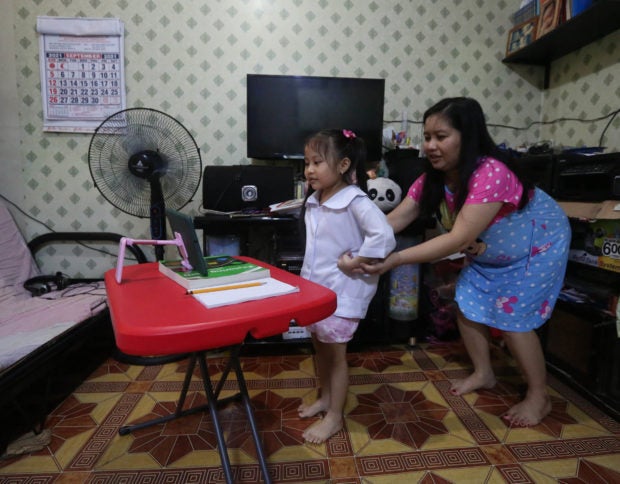 GOT YOUR BACK: Five-year-old Riana Mae Pogoy is guided by her mother as she attends her first day of school as a Kindergarten 1 pupil, through online learning, in the comfort of the family’s home in Binondo, Manila. (Photo by MARIANNE BERMUDEZ / Philippine Daily Inquirer)

MANILA, Philippines — As public schools started holding remote classes for the second year on Monday, Nestor Reyes was supposed to meet his 25 students in technology and livelihood education.

But the weak internet signal from his cramped apartment in Binondo, Manila, failed to connect him to them, leaving the teacher from Jose Abad Santos High School with no choice but to cancel the class.

“I am not the only one experiencing this … [My students also tell me], ‘Sir I do not have data, we do not have [money] to buy [prepaid] load.’ Those are the usual struggles [we face] because there is no support,” Reyes said.

“In distance learning, they tell us that we are just inside our homes and [yet] we are still complaining. Why doesn’t the Department of Education (DepEd) try and [experience] our struggle when it comes to online class?” he added.

In contrast, Education Secretary Leonor Briones called the start of the new school year “a success.”

“We opened classes last year. We successfully ended them. Now we are opening another school year. Isn’t that success worthy of celebration?” she said during a livestream of the DepEd’s National School Opening Day program.

Briones reported that the graduation figures for last school year for Grade 6 learners was at 98.13 percent, or 2.1 million, while for Grade 10 students, it reached 96.9 percent, or 1.88 million out of the 1.94 million who enrolled.

“Ahh, the sweet smell of success!” she said.

For a militant teachers group, there was no reason to call the reopening of classes a success.

“What’s there to celebrate? Another school year of school closure, making the Philippines one of the last in the world to reopen schools amid the pandemic? The lack of gadgets and ample internet support to teachers and students? The still insufficient modules? The millions of children who are yet to enroll?” the ACT Teachers party list group said.

It urged Briones to deal with the “glaring problems” in the sector instead of “patting yourselves on the back for doing the bare minimum of reopening classes while failing to address major issues in education.”

For House Assistant Minority Leader and ACT Teachers Rep. France Castro, there was no victory “as long as schools are closed and our children cannot safely go back to face-to-face classes.”

“How can the DepEd secretary say that the Philippine education system has improved when schools are closed and both our teachers and students are suffering?” she said.

Gabriela Women’s Rep. Arlene Brosas agreed with Castro’s sentiments, as she pointed out that almost 5 million students had dropped out of school while mothers bore the brunt of distance learning.

“What is there to celebrate? That is an insult to mothers and teachers who are helplessly filling in the wide gaps of the government in implementing distance learning. I hope Briones really knows what victory she is referring to,” Brosas said.

She urged Congress and the government to take concrete steps toward the safe reopening of schools like rechanneling funds from nonessential infrastructure to the construction of more classrooms, school-based health clinics, restrooms and isolation facilities.

The DepEd’s distance learning program has been marred by issues such as delays and errors in self-learning modules, inequities among students and teachers in internet connectivity and access to gadgets, and parents’ difficulties in assisting children with their lessons.

While other nations have resumed in-person classes, the Philippines and Venezuela are the only countries whose schools remain physically closed due to the COVID-19 threat.

Briones has proposed to pilot-test in-person classes in 150 schools at low-risk COVID-19 areas but President Duterte has yet to give his approval, according to presidential spokesperson Harry Roque.

“Let us wait for the final decision. What I can say is the President had a positive reaction provided that the pilot would be limited to areas with a low number of COVID cases,” Roque said at a press briefing on Monday.

Preparations were under way for the program’s implementation while waiting for Mr. Duterte’s go signal, he added.

As early as December 2020, the DepEd had proposed the conduct of limited face-to-face classes to the President, which he initially approved. However, as COVID-19 cases went up due to the Alpha variant, Mr. Duterte retracted his approval.

Briones said that based on the proposed guidelines for face-to-face classes, the local governments must give their permission while parents must also submit their written consent.

The Department of Health (DOH) would inspect school facilities to ensure that there were enough spaces to allow social distancing, in addition to a nearby source of water and accessible health facilities.

Transportation, food and supply services that cater to the needs of the students must also comply with the health protocols of the DOH.

Briones said that the documents and proposals from the DepEd had been submitted to health experts specializing in children as well as the Inter-Agency Task Force for the Management of Emerging Infectious Diseases.

Education experts and economists have warned of the wide-ranging consequences of remote learning, including learning loss, mental distress and worsening inequality as some households lack access to reliable internet connection and gadgets necessary for schooling.