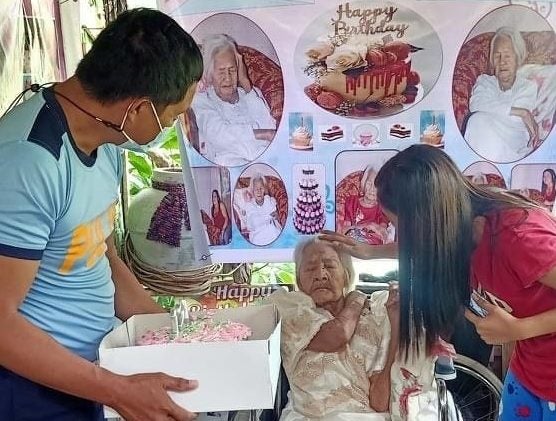 GIFT OF LIFE Francisca Susano celebrates her 124th birthday on Sept. 11 with many gifts, including a cake from the local police, in her hometown Kabankalan City in Negros Occidental. —CONTRIBUTED PHOTO

Francisca Susano was surprised with birthday cakes and gifts at her house in Barangay Oringao.

Commissioner Franklin Quijano of the National Commission on Senior Citizens personally delivered a bouquet of flowers, a plaque of recognition, P10,000 in cash, and a manager’s check worth P24,000.

The plaque from the National Commission on Senior Citizens claimed that Susano, born on Sept. 11, 1897, is also the oldest person in the world.

“This certificate of recognition is given to Francisca Montes Susano for having achieved the healthy and productive age of 124 [and being] the oldest living person in the world,” the plaque read.

Susano is believed to be older than the present world record holder, Kane Tanaka of Japan, who is 118 years old.

The Guinness World Records listed Tanaka, who was born on Jan. 2, 1903, as the oldest living person, whose age was verified in February 2020.

The Provincial Health Office of Negros Occidental gave her a wheelchair while the Department of Health received another wheelchair, vitamins, face shields, dusters and blankets.

One of Susano’s 14 children is already a centenarian at 101 years old, according to her family.

“She is the oldest living Filipino, born before the Philippine Independence Day and was able to witness two world wars,” a police statement said.

“She survived the martial law, the People Power, the Isis (Islamic State) attack, many typhoons and calamities, even the novel coronavirus pandemic that had passed the nation. Truly she really is a thriving national treasure,” it added.