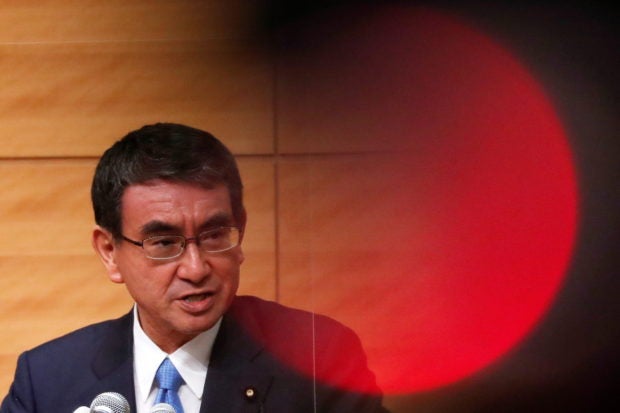 TOKYO — Japan’s minister in charge of vaccines, Taro Kono, has emerged as the favored candidate in weekend opinion polls on whom should succeed Prime Minister Yoshihide Suga as head of the ruling Liberal Democratic Party (LDP).

The winner of the LDP leadership election set for Sept. 29 is all but assured to be prime minister.

In the election, only LDP lawmakers and its grass-roots members will cast their votes, but candidates’ popularity among the general public counts as the winner of the race will lead the party to a general election later this year.

In a survey conducted by the Asahi daily on Saturday and Sunday, 33% of those polled said Kono was most suitable as the next LDP leader, followed by former defense minister Shigeru Ishiba’s 16% and former foreign minister Fumio Kishida’s 14%.

In a surprise announcement, Suga said earlier this month he would step down as prime minister, ending a one-year term that has seen his support crumble as coronavirus cases surged.

The Asahi survey showed that 58% of those polled believe that the next LDP leader should not take over the policies of Suga and Shinzo Abe, who served as prime minister before Suga.

In a similar poll by the Nikkei business daily, 27% of those surveyed chose Kono as most suitable for the post of the ruling party chief, ahead of Ishiba’s 17% and Kishida’s 14%.

Kono and Kishida have declared their candidacy for the top party post, while Ishiba has not made public his intention.

Read Next
Yang skips Senate probe due to hypertension; Gordon wants him to show up
EDITORS' PICK
DOH: Booster doses for fully vaxxed adults to start December 3
Legarda: Ending Violence Against Women, a cause for all
Smart offers wireless fiber-like speeds to Filipino homes with country’s first 5G Prepaid Home WiFi
NGCP transmission tower in Lanao del Sur bombed
Omicron: What science knows so far about latest Greek-lettered COVID variant
This new condo in the South will make you want to turn a new leaf
MOST READ
Ex-DOT chief Ace Durano convicted of graft over 2009 project
DOH: Booster doses for fully vaxxed adults to start December 3
Roque defends Bongbong Marcos: ‘He was only 15 years old in 1972’
6th DQ vs Marcos Jr. filed by ‘real’ PFP members claiming he’s not party member
Don't miss out on the latest news and information.