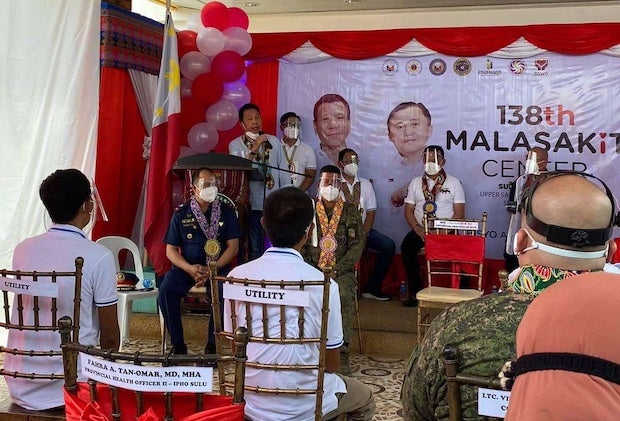 The Philippines’ 138th Malasakit Center opened in Jolo, Sulu on Friday, Sept. 10, 2021. (Photo from the office of Sen. Christopher Go)

MANILA, Philippines – The Philippines now has 138 Malasakit Centers, the latest having opened last Friday at the Sulu Sanitarium in Jolo, Sulu, last Friday, Sept. 3, with an online address by Sen. Christopher “Bong” Go, who authored the law instituting the one-stop medical assistance stations.

This is the second Malasakit Center to open in Sulu after the one in Sulu Provincial Hospital, which opened last Jan. 6. The Sulu Sanitarium is the eighth hospital to open a Malasakit Center in the Bangsamoro Autonomous Region of Muslim Mindanao.

“I’m happy that there are now two Malasakit Centers in Sulu, and I hope this will not be the last,” Go said, speaking in a mix of English and Filipino, as quoted by a statement issued by his office.

Go then recalled how he got the idea for the Malasakit Center while he was the executive assistant of then-Davao City Mayor Rodrigo Duterte.

“I saw the everyday problem of so many patients asking for help at the city hall,” he said.

Some of the patients came from outside Davao City, poor people traveling from neighboring towns and cities to seek medical assistance.

“So when he became president, we started this Malasakit Center,” Go said.

The program was institutionalized under Republic Act No. 11463 — the Malasakit Centers Act of 2019 — which Go principally authored and sponsored.

Under the law, all hospitals run by the Department of Health and the Philippine General Hospital are mandated to open a Malasakit Center. Other public hospitals may also establish their own Malasakit Centers if they meet the standard criteria and can guarantee the sustainability of their operations.

“I made sure that this will become a law so that even if  President Duterte and I are no longer in government they will continue,” Go said. “To the succeeding administrations: I hope you won’t neglect the program that we started, especially because it helps the poor.”

In his address, Go acknowledged the presence of key government and hospital offices — Secretary Michael Lloyd Dino of the Office of the Presidential Assistant for the Visayas, 1st District Rep. Samier Tan, Sulu Governor Abdusakar Tan, Jolo Mayor Kerkhar Tan, and Dr. Fahra Tan-Omar, who is the medical chief of the Sulu Integrated Provincial Health Office.

He also thanked the representatives of partner agencies, among other national and local officials present, who have contributed to the success of the Malasakit Center launch.

Go then praised the staff of the Sulu Sanitarium for their dedication to providing medical care and assured them that their welfare was one of his priorities.

“Thank you very much. No amount of money can compensate you for your tireless service,” he said. “President Duterte and I are ready to serve you, and as your committee chair in Senate, I will support and fight for whatever is needed for the good of your welfare.”

“You have seen how I fought for the local hospital bills because I’m aware of the situation on the ground in which the hospital occupancy rates reach up to 400%,” he added. “Even if it takes us days to debate [in Senate], I will not stop fighting for your welfare and that of our poor countrymen.”

Go is the chair of the Senate Committee on Health and Demography.

Meanwhile, Go also took the opportunity to stress that the government was ramping up its COVID-19 vaccination rollout, having obtained some 52.8 million doses of vaccines as of Sept. 2.

He noted that about 14.4 million Filipinos had been fully vaccinated and another 20.2 million had received their first dose.

“Let’s trust the vaccine because it’s the key that will allow us to return to a normal life,” he said. “The [quarantine] restrictions will only be eased up once many more Filipinos have been already vaccinated.”

“It has been proven that if you’re vaccinated then you’re protected,” he went on. “Most of the cases now that are on the rise are people who have not been vaccinated. So President Duterte and I urge you to get vaccinated so you can be protected.”

Go encouraged Filipinos to continue to show compassion for others by cooperating with the government and being disciplined in observing the necessary health protocols.

“Times are difficult now. We need to do bayanihan, to help each other and care for others so that we can get past this as a united citizenry. President Duterte and I are ready to do whatever we can to serve. We are also very tired, but you give us strength to keep working.”

He said the constant “destructive” criticisms directed at the administration had not disheartened them.

“But we will not lose hope while we have the support of Filipinos — both Muslims and Christians. We will work and serve to the best of our ability because that is what we can proudly offer to you.”

After the opening ceremony, the senator’s staff provided food packs, vitamins, masks, and face shields to at least 20 indigent patients and 281 health workers at the sanitarium.

Selected beneficiaries were also given shoes and bicycles and others received computer tablets for their children’s educational use.

As the vice chair of the Senate Committee on Finance, Go supported the construction of an intensive care unit complex at the Sulu Provincial Hospital and rehabilitation of the Jolo Mainland Water District. He also supported other initiatives, including the construction or improvement of roads, seawalls and multipurpose buildings in various areas in Sulu.

More than two million poor and indigent patients have benefitted from the program so far.

“As I have promised you, in any corner of the Philippines — from Aparri to Jolo — there will be a Malaskit Center. Jolo already has Malasakit Center, and we will also put one in Batanes,” Go had promised earlier.