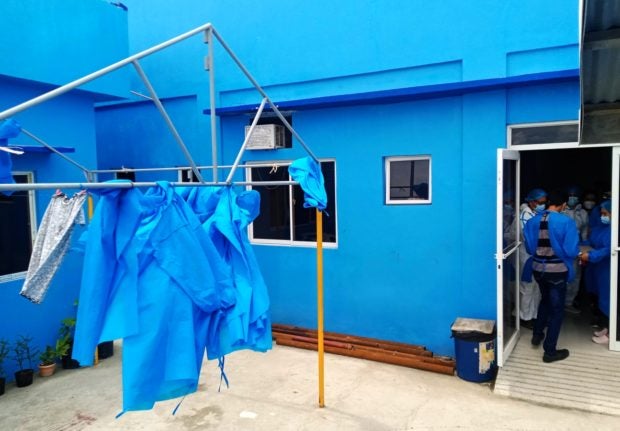 WASHED, DISINFECTED Blue protective suits are washed, disinfected and dried out in the sun for reuse at Pamarawan Hospital on Malolos City’s island-village of Pamarawan. It services nine other surrounding island-villages from two towns of Bulacan. —CARMELA REYES-ESTROPE

CITY OF MALOLOS—Medical workers of the only hospital in Bulacan province serving 10 island-villages of this city and two other towns have been recycling their personal protective equipment (PPE) as they coped with meager resources while combating the coronavirus disease.

“We soak them in disinfectant every afternoon and dry them outside,” Dr. Alfredo Agmata, head of the hospital on the island-village of Pamarawan of this city, told Bulacan Gov. Daniel Fernando, who visited the facility on Friday.

Agmata said the hospital had been stretching the use of their PPE so that the Bulacan provincial government could divert the PPE supply to bigger hospitals confronting the new wave of infections caused by new variants of COVID-19, like the more contagious Delta strain.

The surge has overwhelmed Bulacan Medical Center (BMC) on the mainland, where about 300 medical workers have been treating over 200 COVID-19 patients, the governor said.

Pamarawan Hospital is an extension facility of BMC, but its small communities have not suffered as badly as the bigger villages in Malolos, Agmata noted.

The village of Pamarawan has more than 3,000 residents and is the largest island-village in Malolos. Its hospital has been treating local patients but also residents of the neighboring islands of Namayan, Caliligawan and Masili, all under Malolos; the island-villages of Tibaguin and Pugad in Hagonoy town; and the Binakod, Masukol and Sta. Cruz island-villages of Paombong municipality.

Agmata, a doctor on the mainland Barangay Tikay, travels by boat each day to perform his duties at the hospital.

There used to be two medical staff using PPE in the hospital. But Agmata is currently operating as a one-man medical team after his nurse submitted to quarantine after contracting the virus. The hospital has nonmedical staff members who undertake administrative and logistical tasks.

Pamarawan Hospital was built in the 1980s and was renovated by Fernando’s administration in 2019.

Malolos Mayor Gilbert Gatchalian said Pamarawan Hospital’s upgrade was about to be completed.