Duterte extends state of calamity for a year, 3 months beyond his term 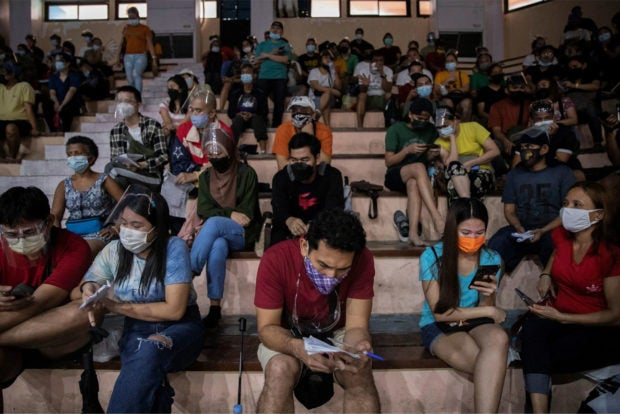 People waiting for their turn at a vaccination site in Manila use their phones to while away the time. REUTERS FILE PHOTO

MANILA, Philippines — The Duterte administration has reopened the economy to various extents under a state of calamity during the pandemic. But with most Filipinos still unvaccinated and COVID-19 cases continuing to post unprecedented numbers, relief from the pandemic remains to be seen.

It also remains to be seen whether President Rodrigo Duterte’s Proclamation No. 1218 on Friday placing the country under a state of calamity for the third time since the pandemic struck, will be enough to hold off any price increase or serious economic dislocation.

The state of calamity will last for another year up to Sept. 12, 2022, three months beyond Duterte’s term.

The previous proclamations empowered the national government to “monitor and control the prices of basic goods and commodities.”

In his latest proclamation, Duterte said that joint efforts of the government, the private sector, and the public led to “significant strides” in improving the country’s capability to implement measures to curb the spread of the disease.

But COVID-19 cases were still increasing despite efforts and “interventions” to contain the virus, he said.

The latest proclamation includes a key provision stating that the declaration of a state of calamity will “effectively afford the national government, as well as the local government units (LGUs), ample latitude to continue to implement the COVID-19 vaccination program, utilize appropriate funds, including the Quick Response Fund, in their disaster preparedness and response efforts to contain the spread of COVID-19, monitor and control prices of basic necessities and prime commodities; and provide basic services to the affected populations.”

Minus the spending for vaccination, this provision is also included in Proclamation No. 929, the first declaration of a state of calamity.

The Department of Trade and Industry on Aug. 29 approved new suggested retail price (SRP) for essential goods, the first since September 2019. This allowed companies to increase the SRP of some basic goods and commodities, such as powdered milk and canned sardines, which increased by 50 centavos, and detergent which rose by P1.

Asked to comment on the proclamation, Ebb Hinchliffe, executive director of the American Chamber of Commerce of the Philippines, said this would have no impact on business since the extension was expected anyway and it would have no implications on the business community.

“We are still in a [state] of calamity,” he said in a Viber message.

The Makati Business Club (MBC) favored a shorter period, preferably up to only the end of this year.

The group said government funds could be reprogrammed to hospitals and other pandemic response measures. However, it stressed that any decision to extend the state of calamity beyond June 2022 should be made by the administration that would take over after next year’s elections.

“The official state of calamity measures — price monitoring and controls, reprogramming of funds to repair and upgrade infrastructure, granting of no-interest loans — may apply in our current circumstances and before a new budget comes into effect,” said MBC executive director Coco Alcuaz in a Viber message.

He noted that the funds for infrastructure could go to hospitals and other COVID-19 facilities, as well as to the necessary technology to make these work with contact tracing and testing.

“We recommend that the state of calamity be effective only till end 2021 given the government’s vaccination projection of 70 percent and positive economic forecast,” Alcuaz said.

After that, a review can be conducted to determine whether it needs to be extended for another three or six months, he said. “Any declaration beyond June 2022 should be left to the discretion of the incoming elected administration,” Alcuaz said.

The President directed government agencies and local governments to provide full assistance and cooperation to each other to curtail and eliminate COVID-19. He also ordered all law enforcement agencies, with military support, to ensure peace and order.

A public health expert said a mere extension was not enough and what the administration needed to do is to “reassess” its pandemic response.

“We need to have a coalition of stakeholders, both public and private, to revisit the current plan of action which apparently is not working,” said Dr. Tony Leachon, a former member of the Inter-Agency Task Force for the Management of Emerging Infectious Diseases (IATF), the government body in charge of pandemic response.

Leachon said additional funds that will be made available during the extended state of calamity need to be closely monitored.

Providing funds without reviewing the plans for which money would be spent would be “counterintuitive to ending the pandemic,” he said.

With the expanded state of calamity, more funds should be allocated to free testing to reduce the high positivity rate and a good contact tracing infrastructure should be established, Leachon said.

“[We should also] procure high-quality vaccines which would address the delta variant, and achieve 90-percent herd immunity to reopen the economy,” he said.

Passengers coming from these places or who had visited them within 14 days immediately before their arrival in the Philippines would be prohibited from entering the country effective 12 noon of Sept. 12, until 11:59 p.m. on Sept. 18, Manila time.

Exempted from the travel restrictions are Filipinos returning via government-initiated or nongovernment repatriation programs and special commercial flights allowed under existing resolutions of the IATF.

These travelers would have to be under a 14-day quarantine—10 days in a facility and the remainder at home or in their final destination.

They would have to undergo a reverse transcription-polymerase chain reaction test on the seventh day.

Filipinos or foreigners who merely transited through any place on the Red List would not be considered to have come from or had been to those places, provided they had stayed in the airport the whole time and were not cleared for entry by immigration authorities.

—WITH A REPORT FROM PATRICIA DENISE M. CHIU