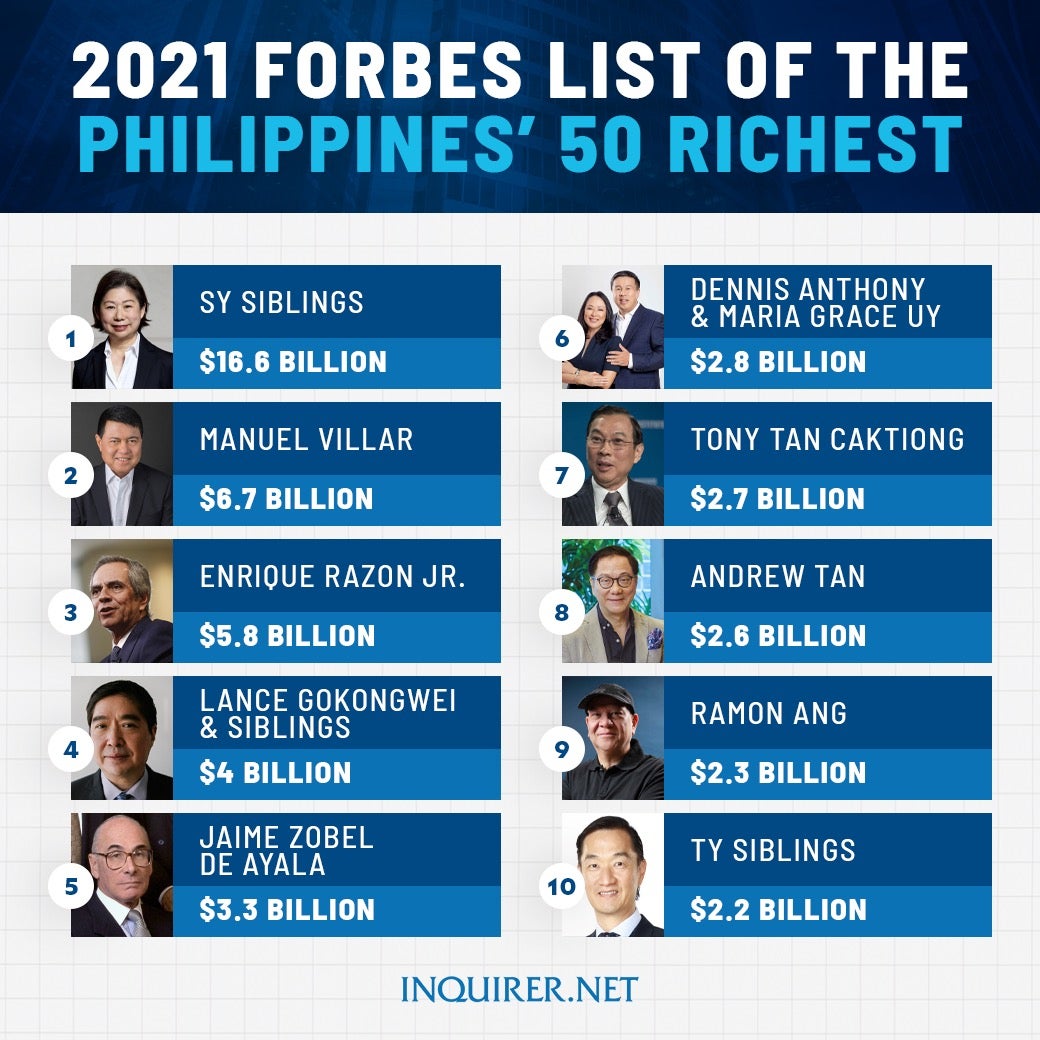 More than a year into the COVID-19 pandemic that caused economic hardships around the world, the Philippines’ 50 richest people grew their combined wealth by 30 percent to $79 billion (equivalent to about P4 trillion at the current exchange rate).

Founders and key shareholders of companies that successfully raised money from the local stock market despite the health crisis were new entrants to the Philippines’ 50 richest list of Forbes Asia magazine.

While many of the usual names remained at the top of rankings—including the Sy siblings of the SM Group, property magnate Manuel Villar and ports tycoon Enrique Razon—the active initial public offering (IPO) market in the Philippines unlocked the value of assets of those at the helm of newly listed companies like broadband provider Converge ICT Solutions and consumer giant Monde Nissin Corp.

The richest newcomers in this year’s list as of Aug. 20, were Dennis Anthony and wife Maria Grace Uy (No. 6, $2.8 billion), cofounders of Converge, which raised $522 million from a stock market debut in October 2020.

Often confused with President Duterte’s Davao-based friend Dennis Uy of Udenna Corp., Converge’s Dennis Anthony Uy benefited from the surge in demand for internet connectivity as companies pivoted to work-from-home arrangements while children shifted to home-based learning during the pandemic.

Uy, now 55, migrated to Angeles, Pampanga province, from then impoverished Fujian, China, at age 11 and worked at his uncle’s supermarket.

In a forum organized by ATR Asset Management on Thursday, he recalled doing a janitorial job at the supermarket and even slept on a cardboard on top of the chest freezer to guard the store at night.

But he was always interested in gadgets and technology. Shortly before the Edsa Revolution, he started his own Betamax and VHS video rental store. He also sold Atari game consoles, computers and computer parts.

He started a cable TV business in 1993 after the explosion of Mt. Pinatubo to bring entertainment to the people of Pampanga. By 1996, he started laying down fiber optic infrastructure that would become his vehicle into the broadband business.

Meanwhile, the record $1-billion IPO of consumer giant Monde Nissin also produced three newcomers to the Forbes list—company chair Hartono Kweefanus (No. 11 with an estimated fortune of $1.95 billion), CEO Henry Soesanto (No. 25, with $795 million), and cofounder and president Betty Ang, this year’s biggest gainer who rose by 20 notches to 18th place due to a more than seven-fold jump in wealth to $1.4 billion.

Soesanto, an Indonesian chemical engineer, convinced his late father-in-law and Monde Nissin cofounder Hidajat Darmono to diversify into the instant noodle business. The game-changing Lucky Me! brand was thus born in 1989, allowing Monde Nissin to quickly dominate the Philippine instant noodles segment with a market share of 68 percent in 2020.

M.Y. San was a competitor for 20 years until its founding family agreed to sell a 60-percent stake to Monde Nissin in 2001 and became a joint venture partner.

Husband and wife Benedicto and Teresita Yujuico (No. 48, $210 million) also reaped riches from the listing of DDMP REIT, a real estate investment trust sponsored by DoubleDragon Properties Corp. of Edgar Sia II, who ranked 28th on the list and the youngest in the magic 50 roster.

The Sy siblings remained as the wealthiest family in this part of the world for the 14th consecutive year. The Sys added $2.7 billion to remain at the top of the list with $16.6 billion in estimated net worth. However, they have yet to return to prepandemic levels.

In 2020, their fortune declined by $3.3 billion from $17.2 billion in 2019 as the pandemic-induced lockdowns affected their property, retailing and banking businesses.

Villar, whose net worth rose by $1.7 billion to $6.7 billion, retained the second spot this year. Also known as the “brown taipan,” Villar retired from politics to focus on growing his business empire after losing his presidential bid in 2010.

Third was Razon, who expanded his portfolio by taking control of water concessionaire Manila Water. Razon increased his wealth by $1.5 billion to $5.8 billion.

Meanwhile, more than a dozen people suffered a decline in fortune, including liquor and airline billionaire Lucio Tan, who slid to No. 12 from No. 7 last year, as his wealth declined to $1.9 billion from $2.2 billion. The Tan family’s Philippine Airlines recently filed for bankruptcy in the United States.

JG Summit chief Lance Gokongwei is No. 4 on the list with a net worth of $4 billion, slightly down from last year’s $4.1 billion. The Gokongwei family’s Cebu Pacific also suffered severely from the pandemic.