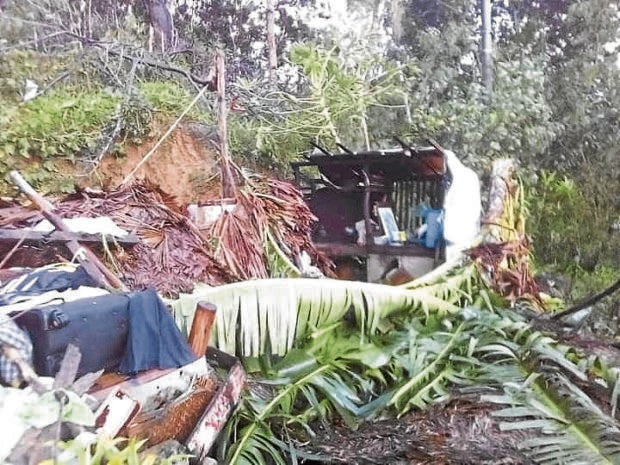 A view of debris in the aftermath of tropical storm Conson, in Dimasalang, Masbate. REUTERS

TACLOBAN CITY, Leyte, Philippines — At least nine people died, eight of them fishermen from Samar, in the wake of Typhoon Jolina (international name: Conson), which caused floods and landslides that displaced 8,600 others in parts of the Visayas and Southern Luzon, disaster officials said on Wednesday.

The Police Regional Office in Eastern Visayas (PRO-8) based in Palo town, Leyte, said nine fishermen were still missing as of 3 p.m. on Wednesday.

Jolina weakened into a tropical storm as it moved across Luzon. The weather bureau reported that another typhoon, “Kiko” (international name: Chanthu), was on a course toward northern Luzon.

The National Disaster Risk Reduction and Management Council (NDRRMC) reported that about 12,200 people were affected by Jolina in the Eastern, Central and Western Visayas regions, and in the Mimaropa and Bicol regions.

It said that those who were displaced were from Marinduque, Sorsogon, Masbate, Albay and Negros Occidental. (See related story in Regions, Page A8.)

The report on the deaths and the missing fishermen were received by local authorities in Eastern Visayas as Jolina dumped heavy rains and whipped up fierce winds before making landfall in Hernani, Eastern Samar, at 10 p.m. on Monday.

The bodies of fishermen Alejandro Solayao, Sonny Boy Ibayan, Joseph Emnas and Benedicto de Paz were found in the waters off the island municipality of Santo Niño in Samar.

Their boat capsized due to strong winds, according to Police Cpl. Kevin Cabiling of the Santo Niño police station.

Another fisherman, 65-year-old Bienvinido Marquez, was on his way home to Barangay Buluan in Catbalogan City, Samar, drowned after his boat capsized off Sierra Island.

Three other fishermen—Ryan Jerusalem, 23, from Tarangan town, Samar; and Roy Carcellar, 52, and Mark Jhun Nierras, 23, both from the town of Daram—also in Samar, died in a similar incident.

The ninth reported fatality was Marcelo Lolo who drowned in floodwaters in Maasin City, Southern Leyte.

Jolina made a second landfall in Daram town at 2 a.m. on Tuesday and later, in Santo Niño close to two hours later.

Priscilla Cabaguing, 39 and a resident of Tacloban City, Leyte, said she stayed awake the entire Monday night during Jolina’s onslaught.

“The wind was howling. We were all awake because we were scared that the wind would rip off our roof,” said the mother of three children.

Heavy rains resulted in floods and minor landslides in the cities of Tacloban and Ormoc and in the towns of Dulag, Burauen, Santa Fe, San Isidro, and Calubian in Leyte; and in Catbalogan and

The Department of Public Works and Highways cleared roads of debris and reported that all major highways were passable on Wednesday.

The typhoon forced the cancellation of COVID-19 vaccinations in some parts of Eastern Visayas.

At least 161 passengers were reported stranded at various ports in Cebu province.

Floodwaters rose to at least a meter in several barangays in Borbon town, said Rodrigo Tecson, the town’s disaster management chief. In Bogo in northern Cebu, floods were reported in the villages of Bungtod, La Purisima Concepcion, Polambato, Taytayan and San Pedro.

The Philippine Atmospheric Geophysical and Astronomical Services Administration reported that Jolina was expected to be over the waters off Zambales province as it blows out of the country on Thursday.

It said Kiko was packing maximum winds of 175 kilometers per hour and gusts of up to 215 kph and was heading toward Batanes province.

—WITH REPORTS FROM DALE ISRAEL, JEANNETTE I. ANDRADE AND KRIXIA SUBINGSUBING