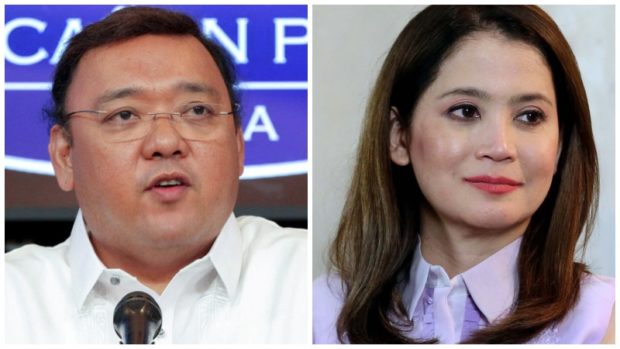 MANILA, Philippines — A self-styled watchdog on Tuesday filed eight complaints against presidential spokesperson Harry Roque, Tourism Secretary Bernadette Romulo Puyat, and several others before the Office of the Ombudsman for supposedly flouting COVID-19 restrictions during the yearlong pandemic.

The filed complaints by Pinoy Aksyon for Governance and Environment were based on previous incidents where the government officials were reported to have violated quarantine restrictions on nonessential travel or not observing social distancing in the course of their official duties.

For Roque, the group alleged that he had violated quarantine restrictions on nonessential travel when he traveled to Subic to swim with dolphins in July last year and in Boracay in February this year.

The group also held him to task for attending an event in Bantayan Island in Cebu where social distancing was not observed.

“Clearly, the presidential spokesperson is not only making a mockery of legally mandated minimum public health standards in response to the COVID-19 pandemic. He flaunts his power as if he is beyond the rule of law,” Pinoy Aksyon said in their complaint.

Puyat, meanwhile, was accused of violating quarantine protocols by bringing along a 6-year-old girl in a trip to Bohol despite the ban on children and minors from traveling.

Mayor Zamora was also sued for violating quarantine protocols during his visit to Baguio last year.

His father, lawmaker Zamora, was accused of violating the guidelines on the issuance of emergency use authorization when he got himself vaccinated with Sinopharm shots before it was approved for emergency use.

At his press briefing on Wednesday, Roque laughed off the suit, saying he never violated any community quarantine regulation.

“It’s a good thing thing [that a case] has been filed so I can show [that] it has been proven that I did not violate anything. Everything was in compliance with the prevailing quarantine regulations. File other cases because that one will just be dismissed,” he said.

Roque recalled that insofar as the Bantayan incident was concerned, authorities have already come out with a report clearing him.

He derided the case as one filed by antigovernment “troublemakers.”

“We welcome that case so that those who want to make trouble against the government will have a sense of worth,” he said.

The Central Visayas regional police office report on the Bantayan gathering said Roque, as guest, reminded the audience on the importance of social distancing and compliance with minimum public health standards.

The report said it rained during the event, which resulted in the people scampering to take shelter. Local authorities eventually took control of the situation by telling everyone to leave the venue or go home.

Sought for her reaction, Puyat insisted that she had been complying with the mandated health protocols and travel restrictions being implemented by the national government and local governments in carrying out her duties as tourism secretary.

“I have been following all the regulations and protocols of the [Inter-Agency Task Force for the Management of Emerging Infectious Diseases] and the [local governments],” Puyat told the Inquirer. INQ